Streaming drives UKTV in 2022 | Ratings/Measurement | News | Rapid TV News
By continuing to use this site you consent to the use of cookies on your device as described in our privacy policy unless you have disabled them. You can change your cookie settings at any time but parts of our site will not function correctly without them. [Close]

Leading British commercial broadcaster UKTV has revealed that after what it calls a year of increased investment and focus on its free streaming service UKTV Play, it has grown direct-to-consumer views by over a quarter and added a further one million registered users. 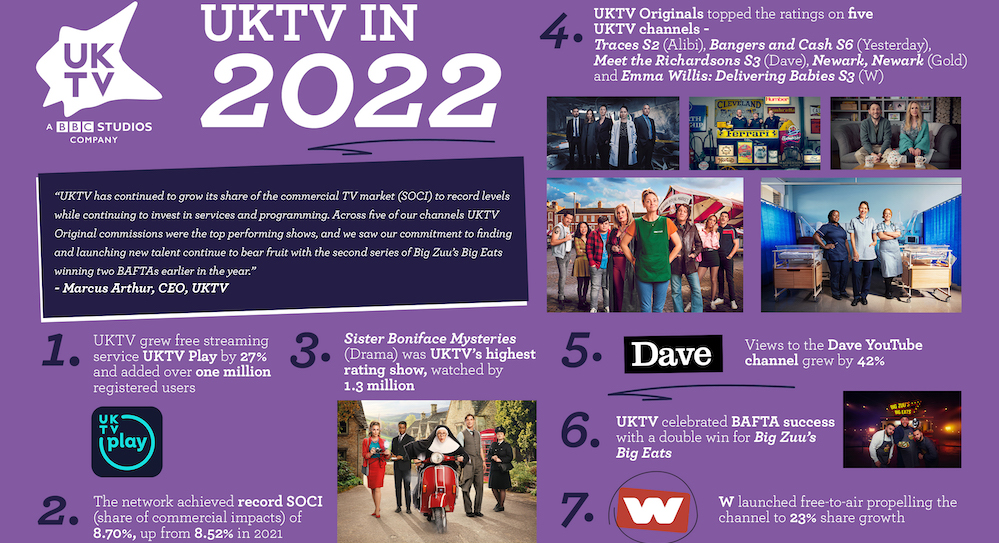 The network also announced that it had achieved record share of commercial impacts (SOCI) in 2022, up 2.1% from 8.52% in 2021 to 8.70% last year, and UKTV added to its silverware with two BAFTAs for its homegrown show Big Zuu’s Big Eats.

In September UKTV Play underwent a full rebrand, with a renewed digital-first brand direction and a fresh look and feel, and towards the end of 2022 the service began to transition content to HD, which once complete will allow UKTV Play viewers to watch their favourite programmes such as Stacey Dooley Sleeps Over, Bangers and Cash, MasterChef Australia and Big Zuu's Big Eats in full HD quality for the first time. UKTV Play also added a million registered users in 2022 to reach 6.45 million.

The growth in UKTV Play’s direct-to-consumer views (27%) was aided by over 3000 hours of new content being added to the service last year. This was achieved through newly acquired programming to complement UKTV’s own originations, including UKTV Play and Dave YouTube original Rosie Jones’ Disability Comedy Extravaganza, and W joining the service following its move free-to-air in March 2022.

W’s move to free-to-air on 28 March 2022 helped propel the channel to 23% share growth year-on-year and UKTV Original commissions accounted for half of W’s top 10 programmes, with series three of Emma Willis: Delivering Babies taking the top spot, with its highest rating episode peaking at 510,000 viewers (Total Consumption - TC). Dave continued to have the strongest reach of any non-PSB owned channel, reaching 13.8 million adults per month in 2022. Its top performing show was series three of Meet the Richardsons which launched to 792,000 individuals (TC).

“Despite the economic downturn in the latter half of 2022, UKTV has continued to grow its share of the commercial TV market (SOCI) to record levels while continuing to invest in services and programming,” said UKTV CEO Marcus Arthur commenting on the viewing figures.

“Across five of our channels UKTV Original commissions were the top performing shows, and we saw our commitment to finding and launching new talent continue to bear fruit …We’ve also made great strides in our digital content strategy, producing more original short-form content. Looking ahead to 2023, we know it’s going to be a challenging time for all commercial broadcasters as we face into an advertising recession, however, at UKTV we remain committed to continuing to invest in channels, content and UKTV Play to fuel growth and provide our viewers with even more content they love.”