Smart TVs used in half of Argentina’s connected homes | Second Screen | News | Rapid TV News
By continuing to use this site you consent to the use of cookies on your device as described in our privacy policy unless you have disabled them. You can change your cookie settings at any time but parts of our site will not function correctly without them. [Close]

Smart TVs used in half of Argentina’s connected homes

Smart TVs are already the third most common device in Argentina’s connected households, being present in nearly half of them. 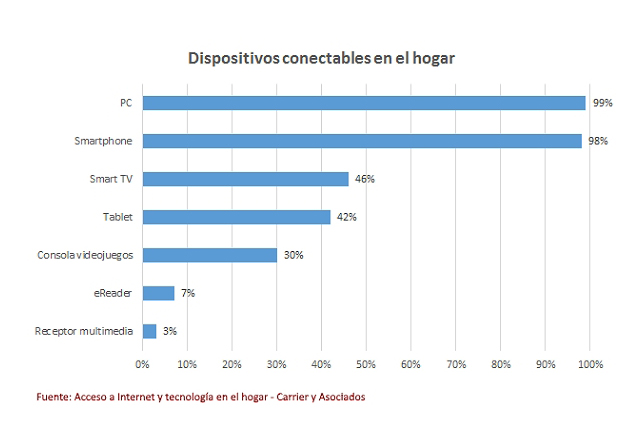 Following the worldwide multi-device trend, Argentina’s homes are no longer depending on a single device to access the Internet. According to the latest report from Carrier y Asociados, each households owns on average 5.8 devices through which it has access to different online services.

PCs are available in 99% of connected homes while 98% have at least one smartphone. The report notes that smartphones’ penetration has grown by 10 percentage points during last year.

But a new player is strongly emerging in this connected scenario, as smart TVs are already available in 46% of Internet homes. Not only that, but 72% of connected households are finding a way to connect their TVs to the Internet through computers, consoles or TV boxes in order to stream content or gain access to online platforms.

Tablets, meanwhile, seem to have arrived late to the multi-screen party in Argentina, as penetration rates haven’t increased during the last year. However, points out the report: “tablets are more common in homes with kids, as they usually get them before their first smartphone.”