North American OTT TV revenues to double | Pay-TV | News | Rapid TV News
By continuing to use this site you consent to the use of cookies on your device as described in our privacy policy unless you have disabled them. You can change your cookie settings at any time but parts of our site will not function correctly without them. [Close]

Releasing further data from a study that has already shown that pay-TV subscriber losses in the US and Canada are set to slow from 2021, falling by 16 million in total between 2020 and 2026, Digital TV Research has revealed that North American OTT TV episode and movie revenues will reach $94 billion in 2026. 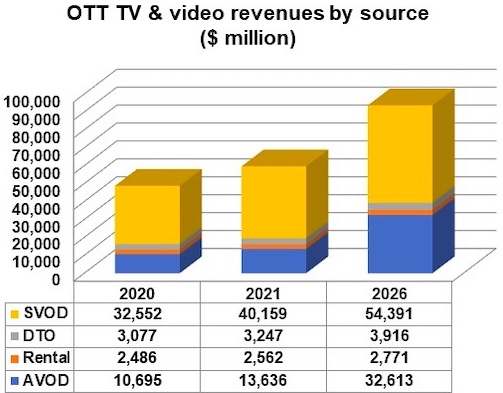 If realised, said the North America OTT TV & Video Forecasts report this figure would be nearly twice as much as the $49 billion in 2020. The US - the world’s most mature market – is set to increase by $42 billion to $88 billion. Canada will double to $5.4 billion.

The study also revealed that subscription video-on-demand (SVOD) and advertising video-on-demand (AVOD) revenues will each increase by $22 billion between 2020 and 2026. AVOD revenues are projected to will triple to $32.513 billion. SVOD will remain the main revenue source, supplying $54.391 billion by 2026, up from 40.159 five years earlier.
Tweet