CABSAT 2015: consumption moves to 'TV now', not TV everywhere | Cabsat 2015 | News | Rapid TV News
By continuing to use this site you consent to the use of cookies on your device as described in our privacy policy unless you have disabled them. You can change your cookie settings at any time but parts of our site will not function correctly without them. [Close]

Just as leading regional firms are setting the groundwork for TV everywhere, the MENA VP of Viacom says that the industry needs to focus on when, not where, viewers want to consume content.

Addressing CABSAT 2015, Raffaele Annecchino, executive VP and managing director of South Europe, Middle East & Africa of South Europe, Middle East & Africa for VIACOM International Media Networks (VIMM), said that there has been a marked change in consumption with what he called the "rise of every screen". This trend, he argued, was particularly noticeable with the explosion of connected devices and the rise of the second screen.

The result, said Annecchino, is that consumers have now redefined TV to mean content on their own terms, indeed this is how the beloved TV everywhere emerged. Yet the executive hinted that a new VIMN research study would show that TV everywhere ought to be referred to as TV now instead. 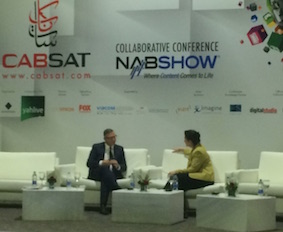 Giving attendees in Dubai a sneak preview of the results, Annecchino revealed that half of viewers (51%) prefer to be able to watch TV when they want to rather than where or how. In other words, viewers expect to be able to watch content the moment they decide to watch that content. Alternative TV viewing sources fulfil different roles for viewers allowing them to watch TV on their own terms, he added.

Yet despite these trends, Annecchino stressed that the industry should never forget that linear remains the primary viewing vehicle for TV in particular in the MENA region, where the national average for TV watching is 6.53 minutes in KSA, which is up 11 minutes year-on-year. He also pointed to the fact that the average time spent watching TV per day was 3.14 minutes, the third highest world average daily viewing time ever recorded.

"We have never lived in such an interesting and challenging moment as [we are] in the last two years. It's an interesting phenomenon: linear TV is the mainstay and consumption of linear TV is increasing in all markets in terms of minutes. In addition people still use linear TV to discover content it's the easiest way to discover the content," Annecchino told the conference.

"Yet new technology is changing the way the consumer works. Different sources of accessing content are fulfilling differing needs. For Viacom the trends are a great opportunity. All the traditional players are on-board for multi-platform. We have started to produce content only for mobile devices. Viacom is a leader in the digital arena... In a world of multi-offers and multi-content you still need a guide and this is where brands are important. Brands are the reference: [and VIMM has] brands such as MTV and Nickelodeon targeted at younger users. Content is the key and we will invest $3.5 billion in producing content. It's a 'glocal' strategy and we are keeping investing in introducing brands and content. One is aligned with the other."