Blast claims revolution in eSports viewing | Infrastructure | News | Rapid TV News
By continuing to use this site you consent to the use of cookies on your device as described in our privacy policy unless you have disabled them. You can change your cookie settings at any time but parts of our site will not function correctly without them. [Close]

eSports live and digital entertainment experiences company Blast has unveiled what it calls a radical new way to watch and enjoy events allowing fans to customise and elevate the way they watch eSports. 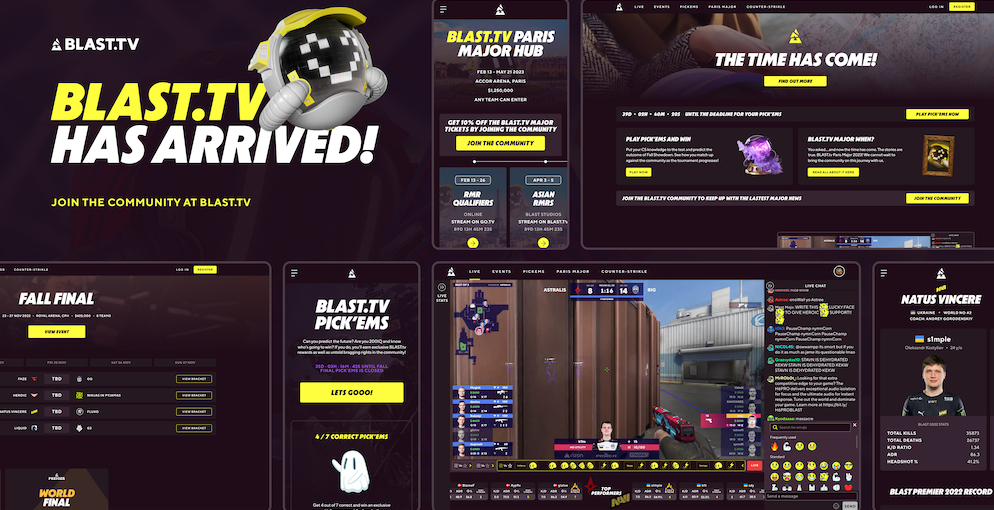 Putting the launch into perspective, Blast noted that eSports viewership has enjoyed impressive growth over the last few years and is expected to continue to grow by 8.7 percent to 532 million this year, with this number expected to grow even further to 725 million by 2025.

The new Blast .tv platform is designed to bring fans closer to the action, serving up what Blast claims will be maximum excitement for eSports lovers, helping them watch events live like never before as well as reliving the highs and lows of past tournaments.

Blast.tv’s live experience is said to be tailored made for the competitive esports audience. An interactive timeline feature catalogues standout highlights to be replayed instantly on the playback timeline. The platform has a custom-built video player with 4K capabilities and a moderated live chat feature that will enable fans to connect with a like-minded community, where fans will be able to impact the events unfolding before their eyes through interactive polls.

“At Blast our aim is to provide next level entertainment across everything we do. The public launch of Blast .tv marks an exciting step on that journey said Blast chief growth officer Tom Greene. “Over the last few years Blast has been working hard to deliver the best esports entertainment possible, and more recently we've been investing in a digital platform that will enhance and supplement these experiences even further.

Outside of the live experience, Blast.tv will provide eSports sports fans with the latest player stats, team standings, mini-games, news and exclusive content and experiences. The consumer launch of the product coincides with Blast Premier’s Fall Final in Copenhagen and comes ahead of the World Final in Abu Dhabi and Blast .tv Major being held in Paris in May 2023. Blast.tv will be the home of all Blast events in the future.

“We have built every aspect of Blast .tv with our fans in mind and with the end goal of being able to bring esports closer to those who love it most. We hope fans will enjoy the way we have reimagined the live viewing experience as well as the games, news and features intended to keep fans engaged outside of the live broadcast,” said Blast chief growth officer Tom Greene. “We feel Blast .tv has the potential to be a game-changer for the esports industry and viewer experience. As well as having every minute of the Blast Premier 2023 season, Blast .tv will be the official home of the Blast.tv Major in Paris.”