Sports streaming set to land knockout punch to US trad TV | Media Analysis | Business | News | Rapid TV News
By continuing to use this site you consent to the use of cookies on your device as described in our privacy policy unless you have disabled them. You can change your cookie settings at any time but parts of our site will not function correctly without them. [Close]

The anomaly whereby US TV advertising has remained stable despite the rapid pace of cord-cutting and decline of linear may be coming to an end as the number of sports rights deals awarded to streaming platforms increases, says a research note from Dataxis. 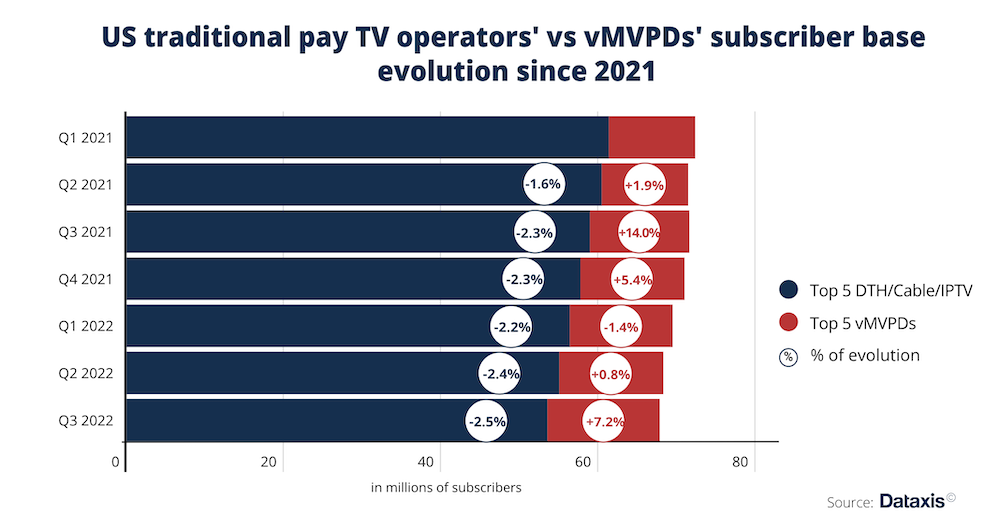 The analysis observed that if the pay-TV market has been struggling for many years already, cord-cutting trend has strengthened even further in 2022. It pointed out the five largest traditional video providers – cable operators Comcast and Charter, together with Dish and DirecTV, which account for around two-thirds of the total US pay TV market - have experienced a decline in their subscriber base by more than 7% in 9 months. For the majority of them, the falling rate has worsened quarter after quarter.

Dataxis also highlighted that more surprisingly, virtual multi-channel video platform distributors (vMVPDs), which long benefited from people ditching their traditional cable subscription, turned out to be also affected by this phenomenon and were not spared for the first half of the year, experiencing a much lower growth or even a decrease.

Looking at individual players, Dataxis calculated that Hulu Live TV lost around 300,000 customers in August 2022 but added 400,000 subscribers in its last financial period. The automatic bundling of the service with Disney+ and ESPN+, which was introduced in December 2021, plays its role in this increase. The end of the year could turn out to be even more critical for Hulu since the termination of the content-sharing deal with NBCUniversal becomes concrete.

After posting three consecutive negative quarters and falling to its level prior to 2018, Sling TV also bounced back in the third quarter, adding more than 200,000 clients.

However, Dataxis cautioned that the latter’s positive results should probably be seen in the light of the beginning of a new football season, rather than a real renewed interest in the platform. In addition, it stressed that the downward trend cannot remain without consequences in the advertising industry and that it was probably just a matter of time before the advertisers start deeply following eyeballs, by shifting budgets from linear cable to AVOD. Indeed, Dataxis expects the US AVOD market to overtake the traditional advertising TV market by the end of 2025.

The study also pinpointed sports as playing a key role in the shift from linear advertising to streaming platforms, with sports broadcasting representing not only a significant part of linear advertising budgets but also a type of programming yielding high CPMs-based revenues. Yet, Dataxis noted that sports has already started to follow the same path from linear cable to digital for a few years, with streamers acquiring dedicated rights packages - Amazon with the NFL - or broadcasters combining their coverage on both their linear channels and streaming platforms - like ESPN/ABC with ESPN+ or NBC with Peacock. It predicts the bidding war between Apple and Amazon to land rights to NFL Sunday Ticket (will be the ultimate example.

“With sports moving to digital, we can expect a decrease in linear television advertising expenditures, which have so far remained stable over the last years, slightly below the $80 billion level. But until when can linear advertising hold the pressure,” said Dataxis senior analyst Guillaume Perrin. “The NBA is reportedly looking to offer a significant amount of games to a streamer, for its next cycle from 2025. Finally, Apple seems to be willing to join Netflix and Disney in the advertising party, looking to build an advertising network around its major exclusive 10-year deal with the MLS from next year. It reinforces the impression that if linear cable TV is doomed, advertising and sports do not intend to go down with the ship.”