Dataxis: quarter of European pay-TV on OTT by 2027 | Media Analysis | Business | News | Rapid TV News
By continuing to use this site you consent to the use of cookies on your device as described in our privacy policy unless you have disabled them. You can change your cookie settings at any time but parts of our site will not function correctly without them. [Close]

Dataxis: quarter of European pay-TV on OTT by 2027

Noting that traditional pay-TV accesses in Europe have been stagnating over the last few years and are expected to reach just above half of the region's households in the next five years, researcher Dataxis is predicting this gap to be filled by OTT pay-TV offers with linear variants representing close to 19% of the total number of pay-TV plans in the region. 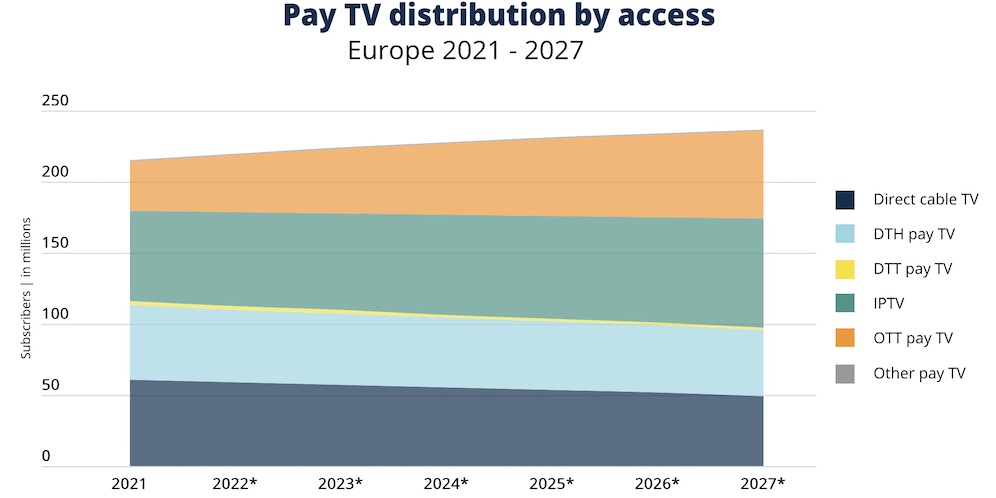 If this growth were realised, this would mean that by 2027 linear OTT plans would represent more than 60 million subscribers. This trend was attributed largely to an ever- rising number of cord-cutters among European TV audiences, switching off traditional pay-TV accesses at the benefit of cheaper OTT plans. But, warned Dataxis, this general trend concealed a wide variety of situation in a market that is known for its fragmentation.

The study observed that pay-TV was increasingly an IP-based market, with network agnostic offers set to catch up with IPTV in the next decade. But if OTT as a TV access seemed to interest both new entrants and legacy players alike, Dataxis noted that a big challenge that they should all be aware of is the potential downsizing effect that OTT could have on the industry's revenues. The data showed that OTT pay-TV monthly ARPUs in the region were almost three times lower than traditional pay-TV accesses and this dynamic would have a strong impact on the upcoming market transition.

Looking at platforms, cable TV and pay DTH were projected to lose an estimated 16% and 10% of their subscriber base by 2027 respectively. DTH though is set to keep on progressing slowly in some Central and Eastern European markets where satellite still often remains the only way to access TV in remote areas. On the cable TV side, Dataxis concluded that growth opportunities seem to be “definitely extinguished”. IPTV on the other hand was predicted to keep on growing, driven by triple-play bundles as a growing proportion of European households newly subscribes to fibre broadband plans. France alone currently accounts for more than a quarter of the region's total IPTV subscribers.

Commenting on future for the industry, Ophélie Boucaud, senior analyst at Dataxis said in the research note: “Increasingly, we see a distinction being drawn between the infrastructure side and the service side within telecom and pay-TV operators' organisational structures. Despite being traditionally closely linked together, both aspects are now more often treated as two distinctively separate branches. With more and more direct-to-consumer streaming offers available to viewers, content delivery becomes network agnostic, set-top box less and relies mostly on the nature of the content aggregated on one platform and the way it is presented to viewers.”