Online long form TV viewing time increases as linear lags | Media Analysis | Business | News | Rapid TV News
By continuing to use this site you consent to the use of cookies on your device as described in our privacy policy unless you have disabled them. You can change your cookie settings at any time but parts of our site will not function correctly without them. [Close]

Even though its analysts stressed that traditional linear TV was most certainly not in a death spiral, research firm Omdia has revealed continued growing strength of nonlinear viewing and social media video in the daily viewing habits of TV users across the US, Europe and Australia. 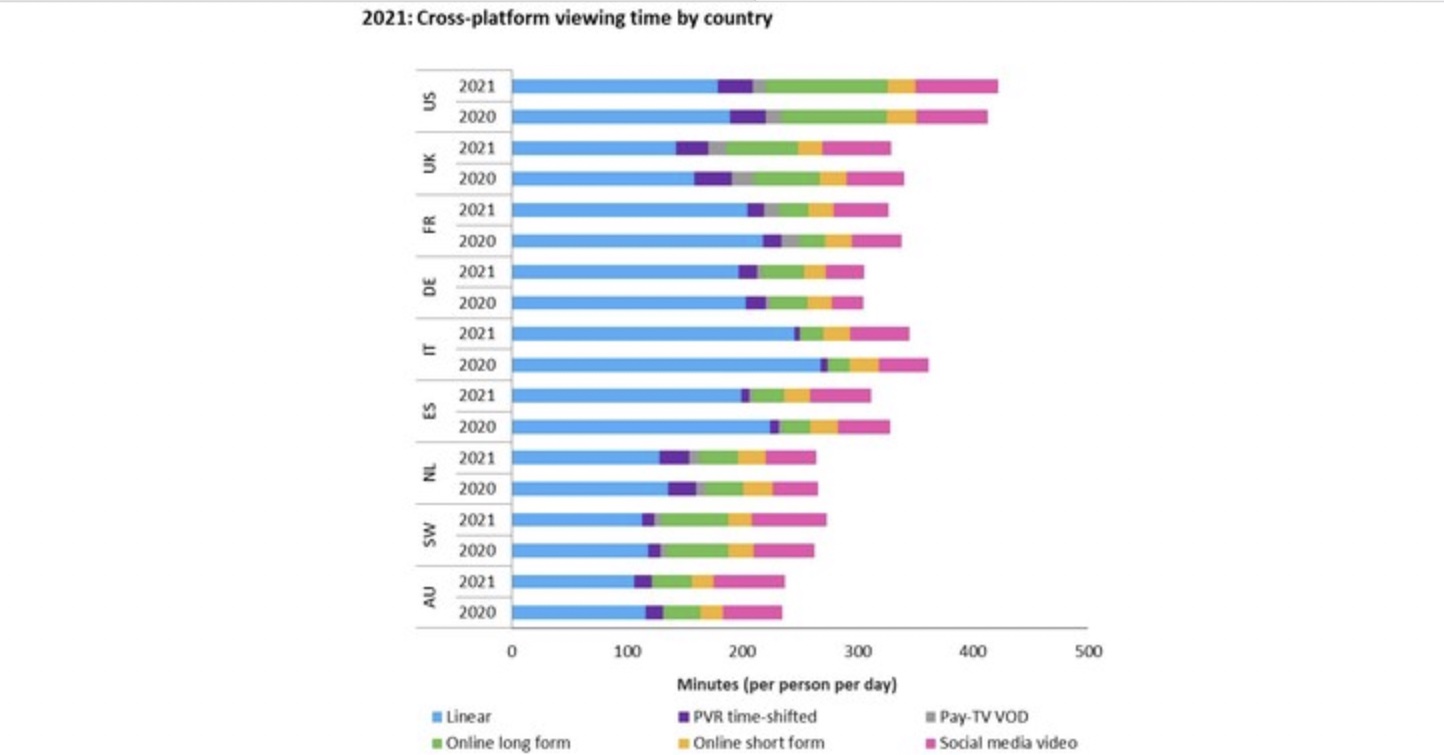 Indeed, Omdia's Cross-Platform Television Viewing Time Report – 2022 found viewing growing beyond the previous year's boom in streaming viewing time. Across all the markets covered average total daily viewing time reached 362 minutes per person per day in 2021, 6 hours and 2 minutes, down 0.5% on thew previous year. Declines in linear TV, online short form and pay-TV video-on-demand (VOD) were attributed as drivers for the drop in viewing with the former seeing the sharpest falls.

Growth in online long form and social media video viewing however counterbalanced these declines, leaving overall viewing to drop by just 2 minutes. By contrast, linear TV viewing time decreased in all markets in 2021; the ending of restrictions and lockdowns that marked most of 2020 was the primary cause, with the continual shift toward on-demand viewing also driving this.

As revealed by the study, online long form was a key area of growth across all markets, driven largely by incumbent online subscription services such as Netflix, Amazon Prime, and Disney+, and the launch of several new OTT services such as Discovery+ and Paramount+. In total, long-form viewing grew by 8 minutes, reaching 68 minutes, 8 minutes ahead of social media video viewing.

Time spent viewing video content on social media platforms increased by 9 minutes in 2021 to an average of 60 minutes per person per day across the nine markets analysed. TikTok was the standout performer for video growth during the year, with the social video platform set to overtake Facebook in total time spent for the first-time in 2022.

Commenting on the findings of the Cross-Platform Television Viewing Time Report – 2022, Rob Moyser, a senior analyst in Omdia's TV ans online video team said: "In highly developed markets such as the US and the UK, 2021 will likely be the last year where linear TV predominates over non-linear TV viewing. On a platform-by-platform level, however, linear TV still remains by some distance the most popular way to watch TV in the markets covered."