Fibre set to rule global fixed broadband | Media Analysis | Business | News | Rapid TV News
By continuing to use this site you consent to the use of cookies on your device as described in our privacy policy unless you have disabled them. You can change your cookie settings at any time but parts of our site will not function correctly without them. [Close]

Having set the de facto gold standard for broadband infrastructure since their inception, copper networks are to lose their lustre rapidly between now and 2030 with direct fibre networks primed to attract the majority of new customers says research from Point Topic. 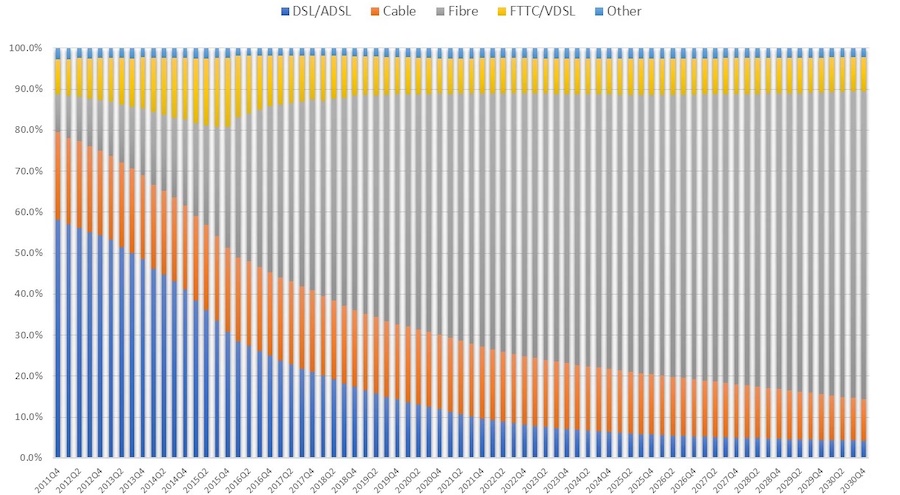 The study, part of the analyst’s Global Broadband Statistics (GBS) service, provides a dataset which features current and historical data as well as forecasts of broadband take-up by DSL, FTTH/P/B, FTTC/VDSL, cable and other technologies, mostly WiMAX, other wireless and satellite, for the period between Q4 2021 and Q4 2030.

The data fundamentally shows that copper networks have been losing customers to more advanced technologies for years and DSL figures are forecast to drop to hundreds or tens of thousands in most technologically advanced markets. The study calculates that by the end of 2030 there will be 1.6 billion fixed broadband subscribers worldwide compared to 1.27 billion in Q4 2021, up by 26%. It predicts that as much as 88% of the fixed broadband subscribers will be in the top 30 broadband markets, ranked as such by the subscriber numbers recorded in Q4 2021.

China is set to remain the largest fibre broadband market in 2030, with projected 523 million subscribers with a surging India second and the US. third. Even though the top ten list is dominated by the developing markets, Japan, France and the UK are listed as leaders.

The UK, along with Spain, are forecast to reach the highest fibre penetration among households in 2030 due to their ambitious fibre rollout projects. The fast developing markets of Vietnam, Chile and Indonesia as well as already well established fibre markets of China, Japan, Sweden, France and Korea are also in the top ten league by forecast fibre penetration.

Yet Point Topic stressed that even though direct fibre growth will dominate this decade, one cannot completely discount FTTC/VDSL and cable platforms, preferred by some operators, and especially their more advanced versions such as DOCSIS 3.1. Point Topic says that it has seen such players going strong in some markets, though it predicts the overall trend of decline in the numbers of subscribers using these technologies at the expense of direct fibre.