Asia Pacific to see 800MN pay-TV subs by 2025 | Media Analysis | Business | News | Rapid TV News
By continuing to use this site you consent to the use of cookies on your device as described in our privacy policy unless you have disabled them. You can change your cookie settings at any time but parts of our site will not function correctly without them. [Close]

Even though the region is traditionally referred to as a mobile-driven market, the pandemic has accelerated the importance taken by larger screens in Asia Pacific, and 110 million additional pay-TV subscriptions are expected to be observed in the next five years says a study from Dataxis. 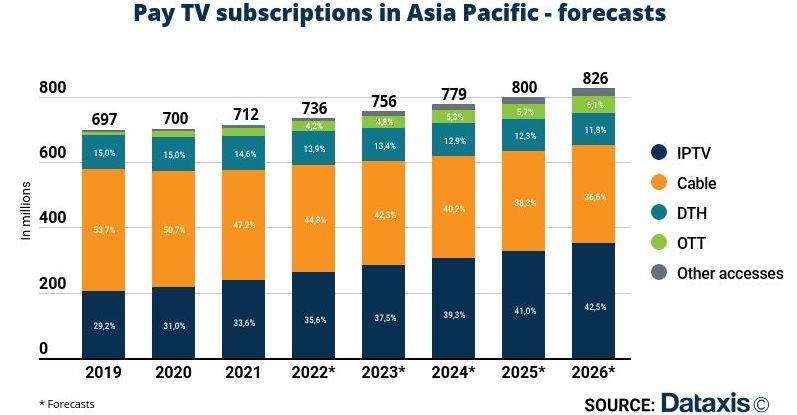 The analysis said that as the market’s population is also expected to increase drastically, regional penetration rate will grow slowly, from 57% in 2021 to 62% in 2026. The most significant transformations will occur in Kazakhstan and Uzbekistan, with pay-TV markets growing by 32% and 17% respectively.

The analyst attributed market growth to the fast expansion of IPTV and OTT subscriptions made possible by the rapid expansion of broadband connectivity. Although it believes that connecting remote Asian regions that still don't have a stable access to the internet remains a challenge, Dataxis added that a 65%-growth in IPTV subscriptions is expected in by 2026.

Dataxis predicted that the most visible impacts in the market will concern the cable and DTH industries which are expected to respectively lose 35 and 6 million clients in the next 5 years. In 2021, Disney closed 18 of its linear cable channels in South East Asia, to promote its new SVOD service Disney+ in the region.

To promote OTT offers, TV operators in the region were found to be betting on high end set-top boxes and on content aggregation. Dataxis pointed to Malaysian pay-TV operator Astro which announced last year that it was looking to secure up to 15 currently standalone OTT platforms on its service.