Brands invest more than $369MN in ad spend on OTT in Q1 2022 | Media Analysis | Business | News | Rapid TV News
By continuing to use this site you consent to the use of cookies on your device as described in our privacy policy unless you have disabled them. You can change your cookie settings at any time but parts of our site will not function correctly without them. [Close]

Despite the quarter typically showing marked sequential decline in spending after the holiday period spike, during the first quarter of 2022, there were nearly 1,400 companies advertising over 3,000 brands that invested more than $369 million in ad spend on OTT platforms, only a 6% dip of what was spent in Q4 2021 said MediaRadar research. 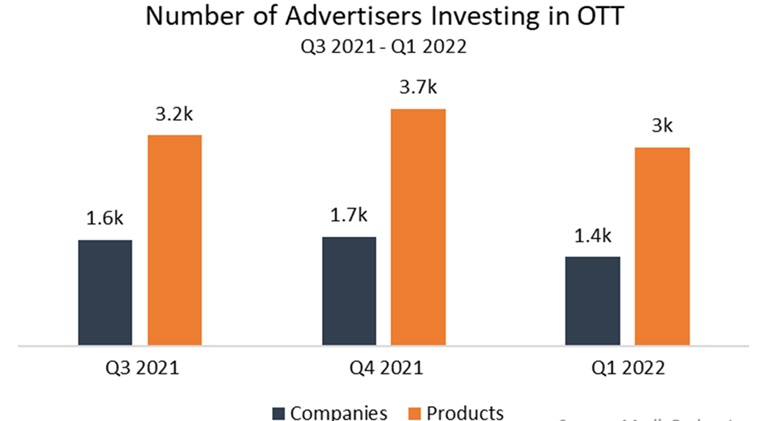 Yet despite the aforementioned small dip between Q4 21 and Q1 22, the study also noted that when comparing to Q3 2021, MediaRadar saw an increase in ad spend of 5%, with $353 million invested in streaming video advertising that quarter.

The study from the advertising intelligence platform is based on reviews of advertising across multiple ad-supported streaming platforms, including Hulu, Peacock and HBO Max. Standalone streaming services are sampled from the ad- streaming packages, across supported a panel of 2 million people in the US. The study also comes as more OTT platforms announced they will introduce ad supported– to make up for loss of revenue from members cancelling subscriptions.

As an indication of the potential of the market, MediaRadar noted that over the course of 2022, 1.88 billion people around the world will use subscription OTT services like Netflix, Disney+ and Amazon Prime Video.

Looking at advertisers on OTT, MediaRadar also found that nearly three-quarters of (72%) of the 3,600 companies that purchased OTT ads in 2021 haven’t advertised yet in 2022. They spent $86 million combined in 2021. The five top spenders in Q1 2022 included Berkshire Hathaway, Capital One, Microsoft, State Farm and Verizon. These names accounted for over $49 million and 13% of the quarter’s total OTT investment.

“Q1 of 2022 saw strong investment in ad supported OTT,” commented MediaRadar CEO and co-Founder, Todd Krizelman. “We saw 25% of advertisers investing across these streaming platforms that did not advertise in 2021. As we come out of the pandemic and this form of media stabilises, it isn’t surprising advertisers are testing advertising on OTT platforms. Despite the dip in overall investment this quarter, it is still a great place for advertisers to stand out and not have their message lost.”