Originals, exclusives investment key for AVOD growth | Media Analysis | Business | News | Rapid TV News
By continuing to use this site you consent to the use of cookies on your device as described in our privacy policy unless you have disabled them. You can change your cookie settings at any time but parts of our site will not function correctly without them. [Close]

With groups such as Roku, Tubi and IMDb TV collectively releasing over 100 brand new original titles in the last two years, the streaming majors are heading towards the AVOD market and this momentum is creating an original content goldrush says a study from Ampere Analysis. 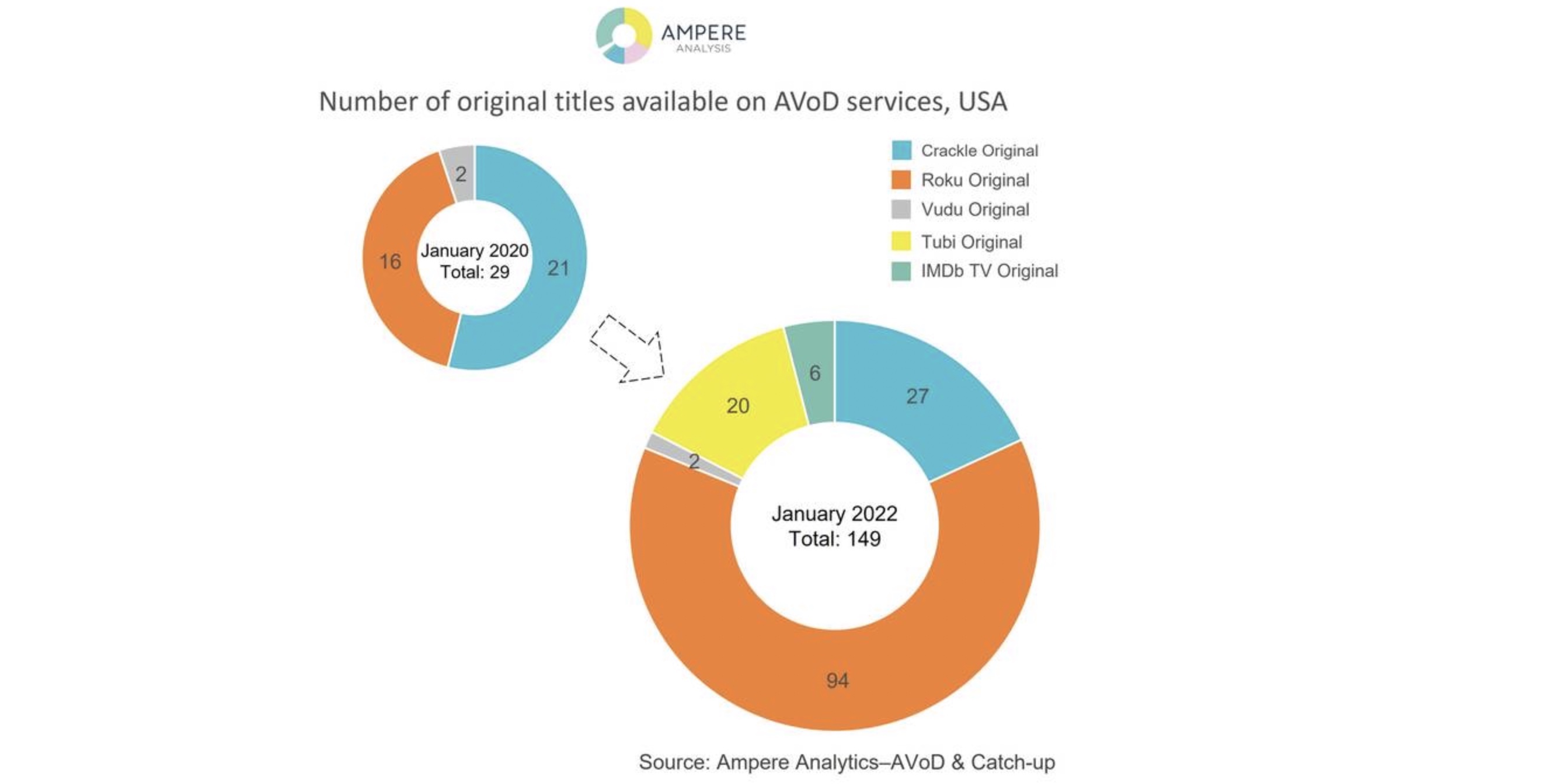 Moreover, said the report, exclusivity is key to differentiate services in a growing market attracting consumers seeking cheaper content with the US AVOD services with the highest investment in original content also seeing the largest growth in usage. As an example, by Ampere’s estimates, Tubi, which has launched 20 original titles, saw monthly usage grow by 164%, between Q3 2020 and Q3 2021.

The analyst noted that the increasing investment in original content mirrors the moves from subscription streamers, allowing providers to add exclusive content to their catalogues amidst a backdrop of a shrinking pool of licensable content as the major studios bring content in-house for their SVOD services. It also observed catalogue exclusivity has proved crucial in such a competitive market; AVOD services with higher volumes of exclusive content benefit from greater usage.

Yet Ampere warned that AVOD platforms could not match the billions of dollars spent by the leading SVOD players in the creation of original content. It additionally pointed out that AVOD services were smaller in scale, and that the advertising business model will likely struggle to justify the sorts of multimillion dollars per-hour content investments which the leading Subscription VOD players have applied to new flagship titles.

Additionally, while AVOD originals do not yet provide enough of a draw to pull viewers away from larger SVOD platforms entirely, Ampere highlighted the fact that they do differentiate services within the increasingly fragmented AVOD market and offer a reason for viewers to choose one service over another.

Looking at the differing strategies of the AVOD players, the report observed that Roku has invested more extensively in original-branded content, in part because of its acquisitions of Quibi’s content assets and its focus on low-cost-per-hour content. Of the six most popular AVOD platforms in the USA, Pluto TV was said to be the only one not to have invested meaningfully in original programming – although it is in a position to take advantage of the programming slate of its parent company – Paramount – and outside the US has become the temporary home for hit Paramount originals such as Star Trek: Discovery.

Despite AVOD originals not having an impact in the wider streaming market – largely limited by their current lack of reach – AVOD platforms should not stop their investment,” said Ampere Analysis analyst Joseph Hall. “Our analysis shows that the AVOD platforms with the highest growth in use since Q3 2020 are those with the most released or announced original programming.”