Xandr teams with LiveIntent for new data and identity offerings | Ad Tech | News | Rapid TV News
By continuing to use this site you consent to the use of cookies on your device as described in our privacy policy unless you have disabled them. You can change your cookie settings at any time but parts of our site will not function correctly without them. [Close]

Xandr teams with LiveIntent for new data and identity offerings

Expanding their relationship from being server-side platform (SSP) partners to collaboration across data and identity, LiveIntent and Xandr are bringing new data and identity offerings to market. 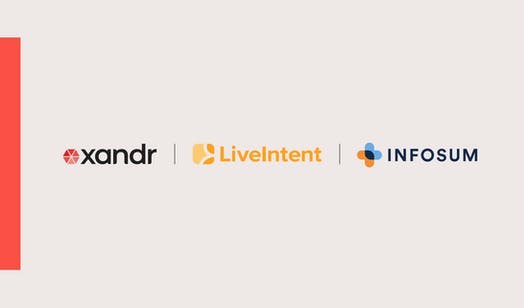 The collaboration is designed to enable both Xandr and LiveIntent to help brands reach audiences in premium contexts throughout the open web, effectively driving growth through a new email-identity based channel.

The new deal will additionally see LiveIntent launching over 15 exclusive data segments built with its licensed data and its proprietary machine learning models in the Xandr Data Marketplace. The alliance is also designed to enable mutual clients to onboard their own first-party audience segments onto the Xandr Invest, Xandr Monetize and Xandr Curate ad platforms directly.

Additionally, LiveIntent will use Xandr Curate to launch data-driven private marketplaces. LiveIntent will help its publisher clients build their own curated marketplaces to unlock new, self-service revenue streams by packaging valuable publisher audiences with premium, omni-channel supply available in the Xandr Marketplace as PMPs. In addition, LiveIntent will build and launch its own proprietary PMPs, bringing LiveIntent’s audience and identity capabilities and Xandr’s Marketplace to any demand-side platform (DSP) the buyer chooses.

“LiveIntent has been a key partner for Xandr – with the relationship dating back to 2009,” remarked Doug Hurd, head of corporate strategy and business development, Xandr. “We’re excited to be able to expand beyond this and provide new data and identity offerings across all of our platforms and marketplace, especially as the identity conversation continues to evolve across the industry.

Xandr and LiveIntent’s collaboration has expanded into several pillars of cross-enterprise identity with first-party audience data onboarding and activation being a priority, either directly through the Xandr platform or the mutual partner of InfoSum. By working with InfoSum, Xandr and LiveIntent say they have been able to protect the security and privacy of data using Infosum’s secure data clean room. The relationship also provides InfoSum clients with a turnkey solution for onboarding first-party data directly into Xandr’s buy and sell-side platforms through LiveIntent without physically sharing or moving the data itself, thus maximising privacy and performance.

“InfoSum is proud to partner with Xandr and LiveIntent to unlock the full potential of first-party data in a privacy-first world," commented Lauren Wetzel, chief operating officer, InfoSum. "Rooted in our belief that cutting edge audience and identity solutions can be executed without ever sharing or moving data – this relationship enables risk-free data collaboration at scale. While we believe our collective solutions will benefit all enterprises and industries investing in unlocking the value of their data, we are excited to work together to solve critical challenges across emerging verticals such as retail media, streaming audio, gaming and more."