Connected streaming video devices flourish in US | Media Analysis | Business | News | Rapid TV News
By continuing to use this site you consent to the use of cookies on your device as described in our privacy policy unless you have disabled them. You can change your cookie settings at any time but parts of our site will not function correctly without them. [Close]

Research from Parks Associates has found that ownership of smart TVs and streaming media players continues to rise with nearly 70% of US broadband households owning at least one streaming video product that is connected to the internet. 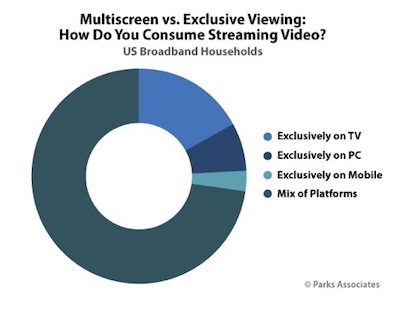 The study, Reaching Today’s Video Audiences: Platform Diversity and ROI, developed in partnership with Bitmovin, examined the increasing variety of device platforms consumers use both in and outside the home to view video content. It also discusses the potential trade-offs, complexities, and ROI challenges presented when attempting to deploy broad platform support.

The fundamental finding was that consumers have fully embraced streaming services, with more than 80% of broadband households having at least one service and 49% having four or more services. Just over half (56%) of US broadband households now own a smart TV. With more than half of those households now using the smart TV as the device they access most frequently to watch streaming video. The increase in connected TV devices and viewership in turn has driven growth in the average number of hours per week of video consumed.

Nearly three-quarters (72%) of broadband households are engaging in multiplatform streaming video viewing, and 40% are viewing on all platforms available to them.

“Consumer adoption of multiple streaming video services may slow, but their comfort with streaming content will persist—the connected home is now permanently a multiplatform environment,” said Erickson director, research, Parks Associates commenting on the Reaching Today’s Video Audiences: Platform Diversity and ROI report. “The streaming video market has experienced increased service usage, and consumers are watching streamed video content on multiple devices in the home and increasingly from multiple services. The role of streaming video across multiple platforms is more important than ever before in the entertainment mix for consumers.”

“The video developer community is seeing similar growth in their applications targeting multiple platforms, as OTT services support 10% more devices than they did last year,” added Bitmovin Player senior product manager James Varndell. “Given how many different platforms providers must support to reach their diverse global audience, developers need to consider all of the factors to launch on a new device, such as development costs, ongoing testing and support, error reduction, and more.”