BBC Select launches on premium subs on Roku Channel in US | OTT | News | Rapid TV News
By continuing to use this site you consent to the use of cookies on your device as described in our privacy policy unless you have disabled them. You can change your cookie settings at any time but parts of our site will not function correctly without them. [Close]

BBC Select launches on premium subs on Roku Channel in US

In what could be a significant boost to its reach and potential added uptake, documentary streaming service BBC Select adds The Roku Channel to its existing platforms of Amazon Prime Video and the Apple TV app. 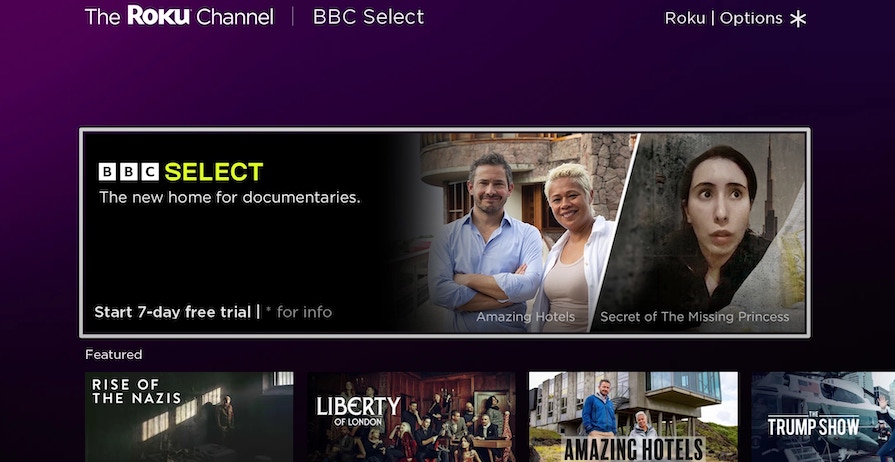 The Roku Channel reached an estimated 70 million people in US households in Q1 2021 and will now be able to show British storytelling from the ad-free subscription streamer offering new exclusive originals and award-winning documentaries. These include royal documentaries in The Royal Collection as well as David Bowie: Finding Fame, The Prince and the Epstein Scandal, Write Around the World with Richard E. Grant, and Jennifer & Joanna: Absolutely Champers.

The Royal Collection includes My Years With The Queen, Queen Victoria and Her Nine Children and The Palace and The Press while David Bowie: Finding Fame presents the story of the Thin White Duke, unearthing the factors that finally clicked into place for him and launched a musician that changed the face of music forever.

Premiering on BBC Select from 1 January 2022 will be The Cult of Conspiracy: QAnon. The documentary looks at a political movement that is still enthralled to President Trump showing an enduring network of what are called “ferocious conspiracy theorists”. The documentary follows those at the forefront of the movement and asks what it means for western society and the shape of politics in the future.
Tweet