The Harder They Fall shoots to top of streaming list | Ratings/Measurement | News | Rapid TV News
By continuing to use this site you consent to the use of cookies on your device as described in our privacy policy unless you have disabled them. You can change your cookie settings at any time but parts of our site will not function correctly without them. [Close]

The Harder They Fall shoots to top of streaming list

Revisionist Western The Harder They Fall has proven a hit among streaming audiences in the US, debuting at No. 1 according to Nielsen’s weekly review. 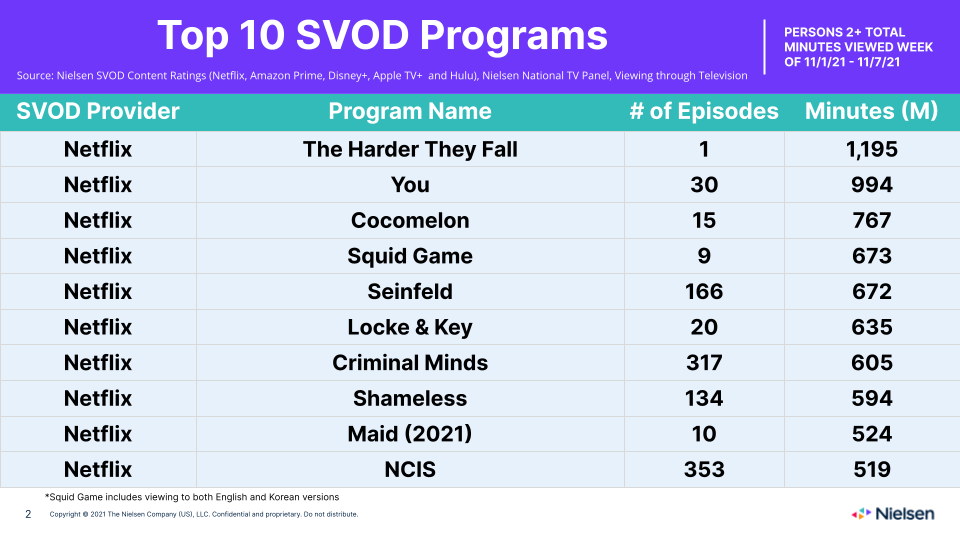 Featuring an all-star, primarily black cast, the Jay-Z-produced film’s audience on Netflix was a hit among diverse streamers, with the most multicultural audience (70%, including 50% African-American households) of any first place finisher.

While The Harder They Fall was the most multicultural title to ever take the first slot, it ranks third this week in that regard, outdone by Colin in Black & White (75% multicultural, 50% African-American) and Narcos: Mexico (78% multicultural and 55% Hispanic).

For the first time, AppleTV+ had two titles across Nielsen’s rankings, as the premiere of Tom Hanks’ sci-fi film Finch went to No. 9 in the Movie category, followed by Ted Lasso.

Meanwhile, Squid Game landed at No.5 overall and second behind Cocomelon on the Acquired list. In another nod to the American audiences exploring international titles, Australian prison drama Wentworth outpaced perennial favourites The Blacklist and Grey’s Anatomy.