Disney+ breaks 100MN subs barrier in US and set to see bundle gains | Media Analysis | Business | News | Rapid TV News
By continuing to use this site you consent to the use of cookies on your device as described in our privacy policy unless you have disabled them. You can change your cookie settings at any time but parts of our site will not function correctly without them. [Close]

As it ended its previous financial year r, the overriding narrative for Disney streaming services was that of stalling growth, however, says Ampere Analysis, the House Of Mouse has just passed the 100 million subs mark in the US for the first time in early Q4 2021 and is about to kick on. 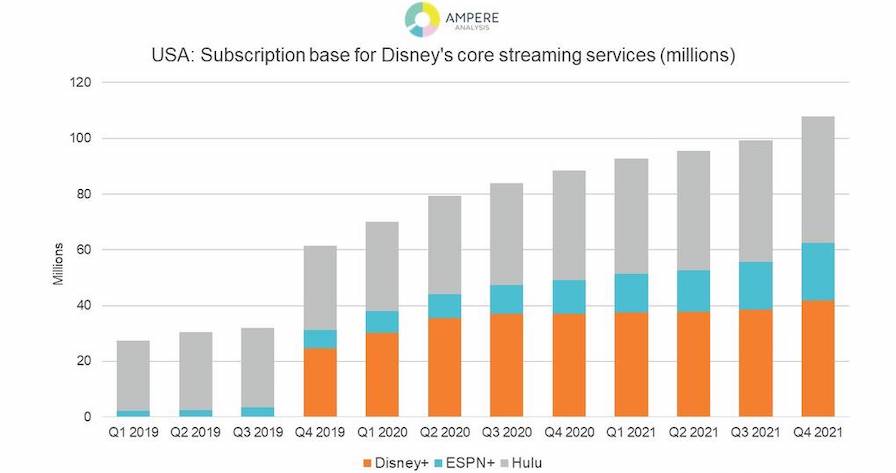 Disney surpassed the 50 million US subscriptions milestone in Q4 2019 following the launch of Disney+ and by the end of this quarter, the analyst expects that the wide content portfolio and aggressive pricing offered by the Disney+, Hulu and ESPN+ bundle will further boost customer numbers.

"The Disney+, Hulu and ESPN+ bundle, which offers an $8 per month saving on taking the services individually, is a strong driver for Disney’s overall streaming growth in the US, particularly for ESPN+,” noted Ampere Analysis research manager Toby Holleran.

“A strong content portfolio from Disney+ and Hulu, making the most of its key Marvel and Star Wars franchises (on Disney+) and FX (on Hulu), as well as the continuation of live sports (on ESPN+) has further driven subscription growth this year. Reports suggest that NBCUniversal is considering moving content from Hulu to Peacock in 2022, but because of the combination of attractive bundled pricing, alongside a strong slate of original content scheduled for release in 2022 across Disney+ and Hulu, Ampere expects the combined suite to experience growth beyond 2021."