Verimatrix takes aim at video pirates with Streamkeeper | Security | News | Rapid TV News
By continuing to use this site you consent to the use of cookies on your device as described in our privacy policy unless you have disabled them. You can change your cookie settings at any time but parts of our site will not function correctly without them. [Close]

Claiming to be offering “an unmatched” combination of anti-piracy tools and zero-code cybersecurity technologies to safeguard the entire OTT content distribution ecosystem in a new way, Verimatrix has launched Streamkeeper. 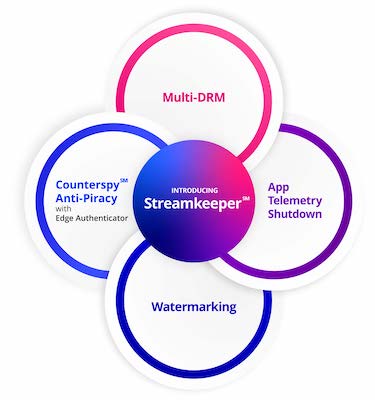 The security technology firm says Streamkeeper will empower customers to hunt down and take out OTT pirates who steal content such as live sports and premium films as they are distributed from the source to the endpoint (mobile app/user level).

Said to be significantly different from any other solution available on the market today, Streamkeeper is said to close authentication gaps and harnesses app protection and dual-telemetry technology to monitor new/unknown hacking attempts and real-time tampering and content theft. The intention is to arm operators with the ability to identify suspected piracy and react instantly with a variety of countermeasures. It is designed enable OTT operators to satisfy studios and other content owners with piracy visibility and protections. Operators also have full control of the visibility offered to content owners. Noting that hackers often weaponise CDNs and end device software such as mobile apps and web browsers – using them against operators.

Verimatrix’s Counterspy zero-code injection approach is attributed with being able to shine a light on previously hidden piracy attacks. The tools provided within Streamkeeper allow customer to fight piracy with cybersecurity countermeasures that are said to be never before available. The autonomous injection of an anti-piracy and app protection security agent that uses proprietary zero code technology to permit the addition deep, defensive countermeasures.

Working in tandem with Multi-DRM, fingerprinting/watermarking and dark web crawling to track down pirated content in bold new ways, Streamkeeper goes beyond traditional reveal and takedown notices anti-piracy, enabling alert verification as well as views into the actual apps, devices and users accessing authorised and unauthorised content during livestreams. This allows customers to combat pirates more aggressively at the endpoint should they choose, or deploy less aggressive responses such as degradation of screen quality or in-broadcast messaging. The ability to halt live streaming pirated content in real-time is said to an incredibly powerful tool.

“Streamkeeper is a game-changing new OTT anti-piracy solution that will forever change how Hollywood and sports will tackle piracy,” said Asaf Ashkenazi, chief operating officer and president at Verimatrix. “It’s a complete content security package…we can now easily add deep, defensive anti-piracy tracing, app protection and countermeasures instantly to customer ecosystems. Content owners and operators have been seeking a solution such as Streamkeeper that leaves no low-hanging fruit for pirates to exploit and does so in a way that empowers the industry while maintaining great user experiences and protecting investments in content. We believe this solution could become the de facto standard for next-generation anti-piracy, recommended by content owners.”

Currently in beta testing and examined by studios, Verimatrix Streamkeeper is scheduled for general availability at the end of Q1 2022.