Vodafone launches 5G TCL GigaCube | Infrastructure | News | Rapid TV News
By continuing to use this site you consent to the use of cookies on your device as described in our privacy policy unless you have disabled them. You can change your cookie settings at any time but parts of our site will not function correctly without them. [Close]

Vodafone has launched the 5G TCL HH500V GigaCube – a new mobile router for consumers and businesses that turns Vodafone’s 4G and 5G network into Wi-Fi, connecting devices in seconds. 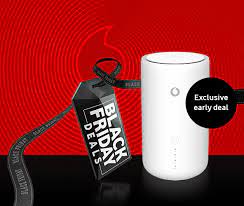 The company says its flexible alternative to ‘standard broadband’ allows customers to benefit from high-speed internet access in areas without fixed line connectivity.

The launch coincides with Vodafone’s best ever deal for the GigaCube, giving customers 50% off for six months on all 24-month GigaCube plans – a saving of up to £360. The deal will also provide customers with an additional 100GB data each month, for the 24-month duration of the contract. The promotion ends on 29 November.

The portable device can be taken anywhere in the UK and can be set up in minutes, without the need for an engineer. Capable of handling maximum speeds of up to 2.8Gbps, customers are able to eliminate buffering, for uninterrupted content.

The GigaCube can connect up to 64 devices at any one time, has a range of 100 metres and includes Wi-Fi 6 support.