Standard formula increasingly the way for Netflix in content localisation | Media Analysis | Business | News | Rapid TV News
By continuing to use this site you consent to the use of cookies on your device as described in our privacy policy unless you have disabled them. You can change your cookie settings at any time but parts of our site will not function correctly without them. [Close]

Standard formula increasingly the way for Netflix in content localisation

The key to success in today’s SVOD market is in global presence and the key to that is a strong localisation strategy and this applies to everyone including market juggernaut Netflix, says a study from Ampere Analysis. 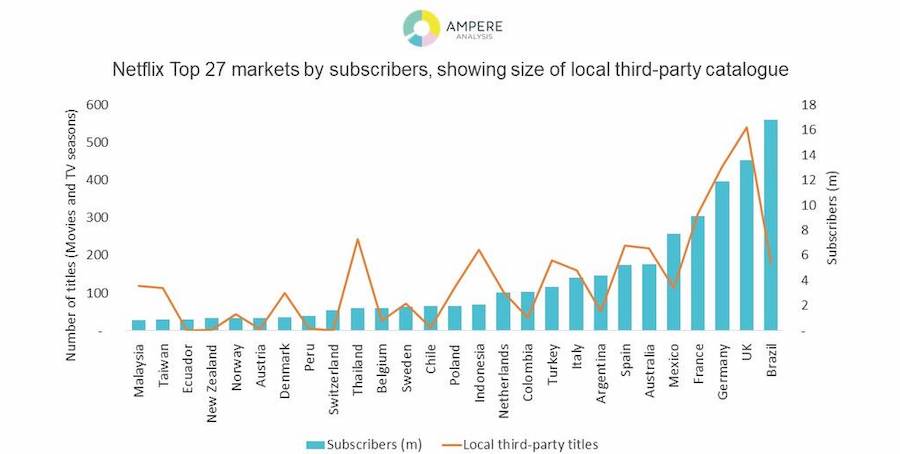 The report investigated where Netflix is likely to increase its content investment as the streaming giant’s focus of activity becomes more global than ever. Ampere noted that comparing the link between Netflix’s subscriber base and catalogue of local titles illustrates where the streamer has an opportunity to expand local libraries to better service existing subscribers and attract new customers. that between Q4 2019 and Q3 2020, North American commissions accounted for 55% of Netflix Original titles, but this share fell to 45% between Q4 2020 and Q3 2021—despite the fact that North American commissions increased in volume— as Netflix continued to grow investment internationally.

Markets in which Netflix is underweight for local original content include Poland and Turkey – and in these countries, localisation is indeed already underway. Territories which were localised in the last three to four years, such as South Korea, Mexico, and South America, displayed, said Ampere, a common formula in local content acquisition and original projects.

The first, an acceleration in the acquisition of third-party titles, small trials of local commissions and then a wider rollout of original local production. This wider rollout was said to begin with a high proportion of movie commissions, then followed by a regular flow of TV-focused activity. Ampere stressed that this was key for driving subscriber retention. After 24 months, Ampere said a second surge in commissions takes place.

Looking at how issues are to be addressed, Ampere observed that Poland offers Netflix a comparable market size to some secondary Latin America and Western European territories, and indeed Netflix has recently expanded the volume of local third-party titles on offer in the territory. The analyst believes that there is now further opportunity for the company to expand its Polish-origin library to better serve existing subscribers and to attract new customers.

“Between Q4 2019 and Q3 2021 Netflix increased the volume of original titles being commissioned, with international now the focus of activity,” remarked Richard Cooper, research director at Ampere Analysis. “This strategy outstrips that of its international competitors, due to Netflix’s relative maturity and the company’s drive to acquire ever more subscribers. The increase in commissioning outside the USA underscores the importance of international markets to Netflix’s continued global expansion.”