Endeavor Content acquires global rights to Hope | Deals | News | Rapid TV News
By continuing to use this site you consent to the use of cookies on your device as described in our privacy policy unless you have disabled them. You can change your cookie settings at any time but parts of our site will not function correctly without them. [Close]

Marking its first ever Russian-language series acquisition, Endeavor Content is to provide global distribution for Hope, the latest returnable series from the START subscription-based streaming service for Russian-speaking audiences. 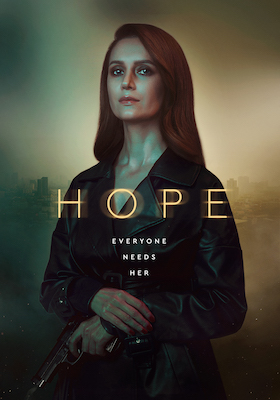 The espionage action series is set between brutal and lawless 1990s Russia and the present day, starring multi-award-winning Victoria Isakova as Nadezhd (Hope in English), a ruthless assassin for the Syndicate, a criminal organisation she was forced to work for as a teenager in exchange for getting out of prison. In the programme, director Elena Hazanov, also helming the adaptation of Dina Rubina's novel Petrushka Syndrome, explores the duality of women’s nature in the series by examining the psychology of complex female protagonist Hope and the conflict between her maternal instincts and her true nature as a brutal contract killer.

Hazanov achieves this with a mix of violent, bloody assassinations, flashbacks to Hope’s training to be a professional killer, and the complicated relationship with her own psyche, family, and the conflicting father/daughter dynamic with her mentor from the Syndicate.

The series was produced by START, the home of, and reflects its continued growth in the international scripted media landscape. START is co-founded by the producers of the renowned film studio Yellow, Black and White.

“With its strong female central protagonist, and expert directing by Elena Hazanov, it is a very proud moment for us to have Hope noticed and picked up by Endeavor Content. At every stage of this relationship, they have shown a real love for Hope and are the perfect partners to help bring this brilliant series to audiences around the world,” said Daria Bondarenko, EVP international sales and acquisitions at START.

“Hope” is a cinematic series with a compelling plot that will appeal in every continent. We know it will have viewers on the edge of their seats as the story unfolds and they become invested in the complex characters. Endeavor Content has an excellent track record in selling high quality international drama to the global market, we’re looking forward to their team presenting its first Russian series to buyers on the global stage.”

“We’re proud to partner with START on our first Russian language drama. The Russian market is full of robust scripted formats which we’ve been tracking with a keen eye, and this script in particular speaks to Endeavor Content’s focus on elevating female and underrepresented voices,” added Endeavor Content director, content Liz Tang.

“With the brilliant director Elena Hazanov at the helm, Hope really stood out to us as a best-in-class, premium cat-and-mouse thriller centred around Victoria Isakova’s portrayal of a ruthless, conflicted assassin. We can’t wait to bring this show to audiences globally, and to see how the story continues to unfold for future seasons.”