Manifest takes off on Netflix | Ratings/Measurement | News | Rapid TV News
By continuing to use this site you consent to the use of cookies on your device as described in our privacy policy unless you have disabled them. You can change your cookie settings at any time but parts of our site will not function correctly without them. [Close]

Manifest takes off on Netflix

Manifest, a supernatural drama series from NBC, added its first two seasons to Netflix on 10 June and is now claiming to have generated 'droves' of viewers, rising quickly in the Netflix series total viewing hours ranking in June according to The NPD Group. 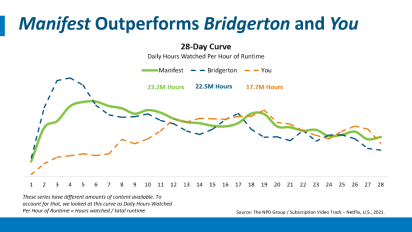 While longer, multi-season series licensed from major networks tend to garner a lot of viewing hours, they don’t often amass as much viewership and popularity as Manifest has seen so far.

John Buffone, media entertainment industry analyst for NPD, commented: “Netflix has put out a strong slate of original content, ranging from comedies and dramas to documentary series. Every month, new seasons of Netflix original series debut on the platform and often make it into the top tier of the rankings. However, few series that originally aired on TV networks have the trajectory of Manifest.”

In its first 28 days on Netflix, an estimated 31 million households watched the first season of Manifest. Insights from NPD's Subscription Video Track reveal that it was viewed by consumers more than Netflix original series Bridgerton and Lifetime series, You.

The first season of Manifest debuted on NBC in September 2018 and its second season came out in 2020. The show was renewed for a third season, which began airing in April 2021. The final episode of the show aired on the network on 10 June 2021, the same day the show’s first two seasons became available on Netflix.

Even though NBC cancelled Manifest ahead of its fourth season on the network, a new social media movement, using the hashtag, #SaveManifest, might help to bring the show back. Among them was novelist Stephen King, who tweeted the hashtag to his more than 6.5 million followers.