Original content drives Apple TV+ slowly but surely | Ratings/Measurement | News | Rapid TV News
By continuing to use this site you consent to the use of cookies on your device as described in our privacy policy unless you have disabled them. You can change your cookie settings at any time but parts of our site will not function correctly without them. [Close]

Describing the presence of Apple TV+ in the hugely competitive SVOD market as a slow burner may be an understatement, but analysis from the Reelgood film and TV streaming search engine service suggests the company may about to hit the accelerator.

Apple TV+ launched on 1 November 2019 in territories including North America, Latin America and the Caribbean, Africa, Europe and Central Asia, Asia-Pacific and the Middle East, offering original shows, films and documentaries. The initial slate was headed by much- talked about Reese Witherspoon and Jennifer Aniston-led The Morning Show as well as thriller See and space drama For All Mankind. Other Apple originals debuting in the early months included series Servant, Truth Be Told and Little America and films Hala and The Banker. 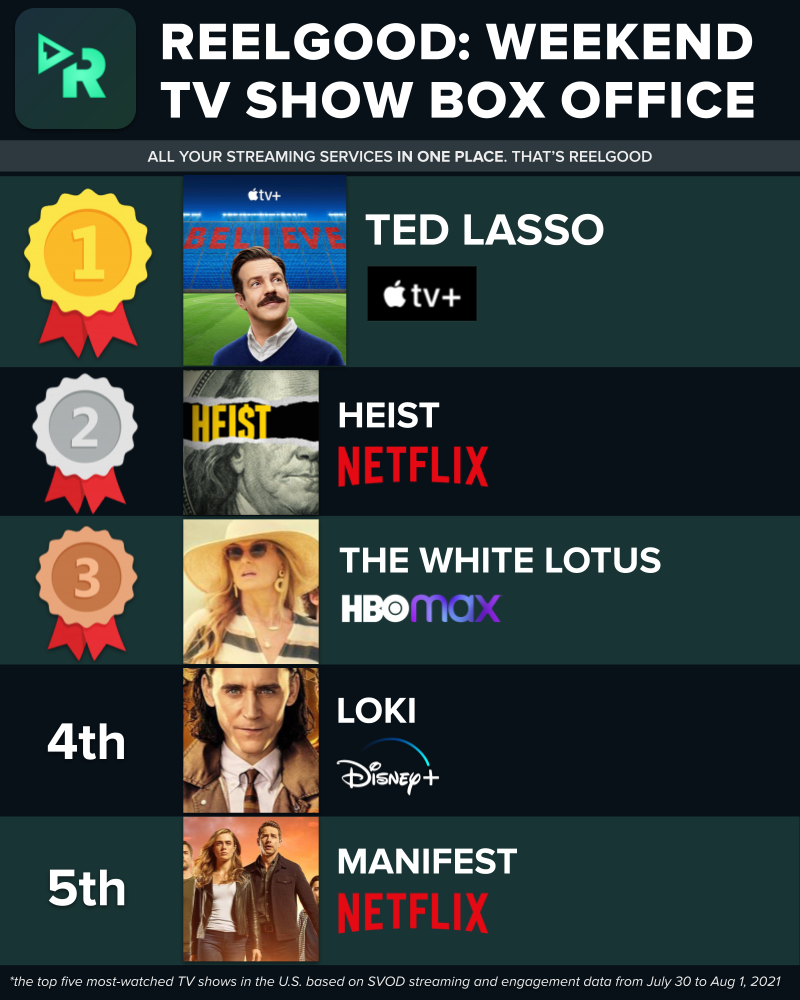 Yet when compared to the likes of other new subscription video-on-demand services that have launched since, most notably HBO Max and Peacock, and the meteoric ascent of Disney+, Apple TV+ can be seen as something of a laggard.

Yet Reelgood feels that the service’s time may be coming, and in the unlikely form of football-based US/UK comedy Ted Lasso for which Season 2 has set a new record as the streaming platform's biggest premiere day and opening weekend ever.

Data released showed Ted Lasso season 1 debuted with 1.9% shares of weekend streaming on Reelgood from 14 to 16 August , 2020. Last week, Season 2’s opener on the week beginning 26 July got a much warmer reception, with 4.6% shares of weekend streaming. Since season 1 debuted with three episodes and season 2 opened with only one, Reelgood said that it had evened the playing field by analysing this data on a user level.

Looking at the data for Apple TV+ in general, Reelgood noted that it also saw that different TV shows on the service tended to reach a wider audience during the opening weekend of their second season vs. the first. This it observed was a good indicator that Apple's original content is doing its job keeping subscribers entertained and hopefully building a loyal fanbase along the way. For All Mankind was only the 41st most-watched TV show across all SVOD streaming platforms during the opening weekend of its pilot season, but when season 2 began, it became the 14th most-watched TV show during its first weekend.

In what it said could be pointers for the future, Reelgood suggested the growth in streaming and engagement for Apple TV+ Originals seemed to be affecting brand new releases as well such as Lisey's Story(2.5%) and Schmigadoon! (2.1%) which opened to bigger shares of streaming compared to Ted Lasso during the premiere of its first season. It noted that Ted Lasso appeared to be keeping the momentum going as from 30 July to 1 Aug, the second episode of season 2 garnered 5.3% shares of streaming and engagement.

“While the journey to match the popularity of recent hit shows such as WandaVision and Loki may be challenging, it's clear that Apple TV+ is at least on the right path with its original content,” Reelgood concluded.