Olympics opening spurs streaming surge | Media Analysis | Business | News | Rapid TV News
By continuing to use this site you consent to the use of cookies on your device as described in our privacy policy unless you have disabled them. You can change your cookie settings at any time but parts of our site will not function correctly without them. [Close]

As an Olympics like no other got underway in Tokyo, sports fans took to online video and social platforms to watch the action in equally unprecedented volumes according to research from Conviva. 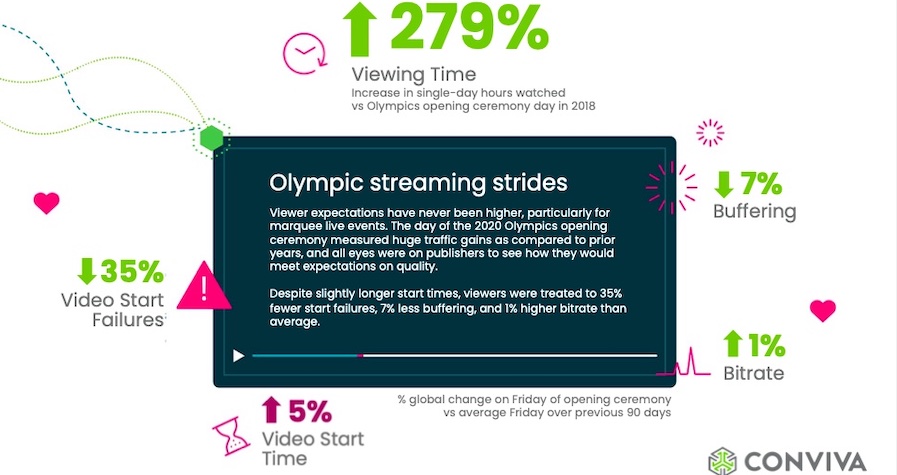 The streaming data for this report was collected from Conviva’s proprietary sensor technology currently embedded in 3.3 billion streaming video applications. It also includes data from Conviva’s publisher base collected on 23 July 2021, the date of the opening ceremony of the 2020 Tokyo Olympics, both at a global scale and including only publishers streaming the Olympics. Data comparisons include global benchmarks of the previous 90 days as well as the opening ceremony of the 2018 Winter Olympics in PyeongChang.

Explaining why it chose the event to make its study, Conviva said he way people watch the Olympics and truly the way they consume any type of media, benchmarked every two to four years, is an excellent glimpse into the changing trends.

Indeed, indicating just how online video has progressed over the last few years, The streaming and social media intelligence and analytics firm found that for the opening ceremony, streaming activity spiked at 279% compared with 2018. The study also found that the growth in time spent streaming 2021’s opening ceremonies as compared with 2018 was also accompanied by what it called “impressive” quality gains with 35% fewer start failures, 7% less buffering, and 1% higher bitrate than average.

Conviva said that during the opening ceremony, smaller screens “surprised” as mobile phones and desktops each captured 27% of streaming viewing time, whereas connected TV devices captured 23%.

The Conviva report found that the USA Olympic account had the second highest total number of cross platform engagements with 287,802, behind Brazil which generated 715,485. The Kazakhstan Olympic committee earned its nation the highest engagement rate and most engagements on any social platform with a video of its flag bearer on Twitter.