Streamers scale up to offer direct competition with studios | Media Analysis | Business | News | Rapid TV News
By continuing to use this site you consent to the use of cookies on your device as described in our privacy policy unless you have disabled them. You can change your cookie settings at any time but parts of our site will not function correctly without them. [Close]

Streamers scale up to offer direct competition with studios

The first quarter of 2021 saw Netflix and Amazon go to the movies with the highest number of original films commissioned by the former in its history says a study from Ampere Analysis. 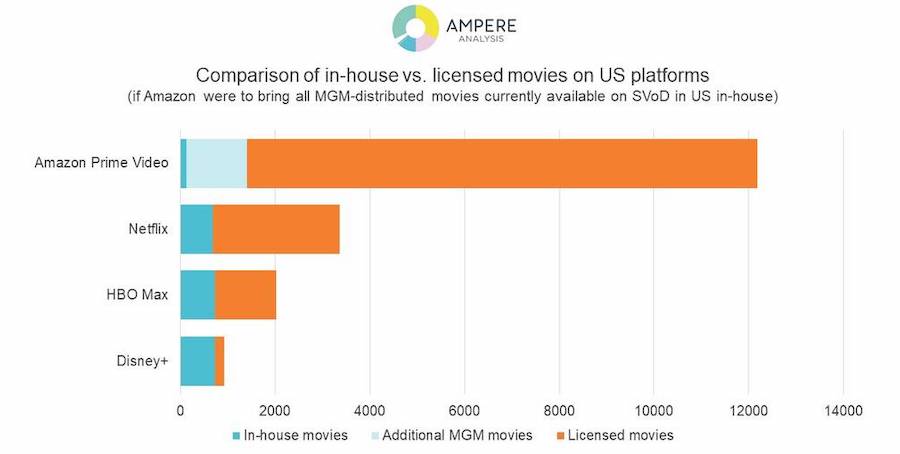 The report notes that the ramp up is driven partly by the phenomenon of Covid-catch-up, making up for time lost to lockdown production shutdowns, and that it is also a reflection of the on-going importance of films to both Netflix and Amazon in the face of renewed competition from film-rich studio majors.

Ampere observed that Netflix is following a strategy similar to that used for its high-end TV productions by focusing on originals, and that contrast Amazon’s strategic focus on films is fuelled by licensing and by its recent agreement to acquire MGM and its library of over 4000 titles. Netflix’s original film strategy, in particular, is focused on growing access to franchise-able IP as it uses adaptations and reboots, drawing lessons from its TV originals.

The report observed that Netflix has long been by far the largest SVOD commissioner of original films, which have consistently accounted for around 25% - 30% of its first-run commissions each quarter since Q4 2018. A slate of new projects in Q1 2021 represents the highest number of film orders in a single quarter.
Ampere added that Netflix was now looking to play the studios at their own game by developing new film franchises or acquiring franchise-building Intellectual Property (IP). Franchise building is a key driver of Netflix’s film commissioning strategy. Of Netflix’s original film commissions made this year, 46% have been remakes, sequels, spin-offs, or adaptations of existing IP. It has also been adopting an acquisition-to-original model in its film commissioning strategy, acquiring the rights to make sequels to existing box-office hits.

The analyst also remarked that the shake-up of the theatrical market caused by Covid-19 has catapulted films to the forefront of new streaming services’ competitive strategies. In the face of blockbuster studio releases from heavyweights like Disney and Warner Bros. launching direct to consumer, players including Netflix, Amazon, and Apple have rushed to bag films previously intended for the box office. Amazon acquired Sci-Fi Action film, The Tomorrow War and Apple bagged the rights to Sundance indie hit, CODA, set to be released on Apple TV+ in August.

With Paramount and Disney following Universal’s lead and shorter theatrical release windows looking increasingly likely to become the norm, Ampere said that exclusive licensing deals such as the one Netflix agreed with Sony in April 2021 will remain crucial as streamers scramble to establish their own rival properties.

Amazon Prime Video was found to be continuing to focus on the markets where its parent company has the greatest foothold. It is instead looking for ready-made franchises to acquire to boost its already strong position in offering a huge choice of film content. MGM’s studio’s film library was the driving motivation behind Amazon’s recent acquisition. Prior to the expiration of the company’s licensing deal with MGM subsidiary Epix in June 2021, Prime Video was already home to over 70% of all MGM-distributed films available on streaming platforms in the US. Ampere calculated that the permanent addition of such films alone to Amazon’s catalogue would see its store of in-house films overtake that of Netflix. With a touted further 2700+ films in the MGM vault, the analyst says the acquisition will substantially increase Amazon’s already considerable films offering.

“While the platforms’ strategies necessarily differ, both Netflix and Amazon are pursuing the same goal of competing with the traditional studios on the level of tentpole titles,” commented Ampere Analysis Analyst Alice Thorpe.

“Netflix can now lay claim to true studio status in terms of the global production infrastructure it has established in recent years, but it is still chasing franchise success when it comes to films. What’s clear from its recent commissioning is that the platform is not just relying on sequels to the likes of comic book adaptation ‘The Old Guard’ to make that happen. Building local franchises with crossover appeal in multiple territories is also key to its strategy. Meanwhile, Amazon is buying into the franchise game to enable it to scale up from its critical successes. The global brand recognition that comes with a property like Bond will help further assert Prime Video’s independence from Amazon’s ecommerce business by making it a destination for bonafide blockbusters as well as buzzy indie titles.”