Android TV accelerates in STBs and smart TVs as global pay-TV market declines | Media Analysis | Business | News | Rapid TV News
By continuing to use this site you consent to the use of cookies on your device as described in our privacy policy unless you have disabled them. You can change your cookie settings at any time but parts of our site will not function correctly without them. [Close]

A study from Rethink Research is predicting that as pay-TV households continues their path of secular decline from an estimated 921 million in 2020 to 680 million in 2026, shipments of operator set top boxes (STBs) will be similarly impacted, falling from 242.6 million to 184.8 million. 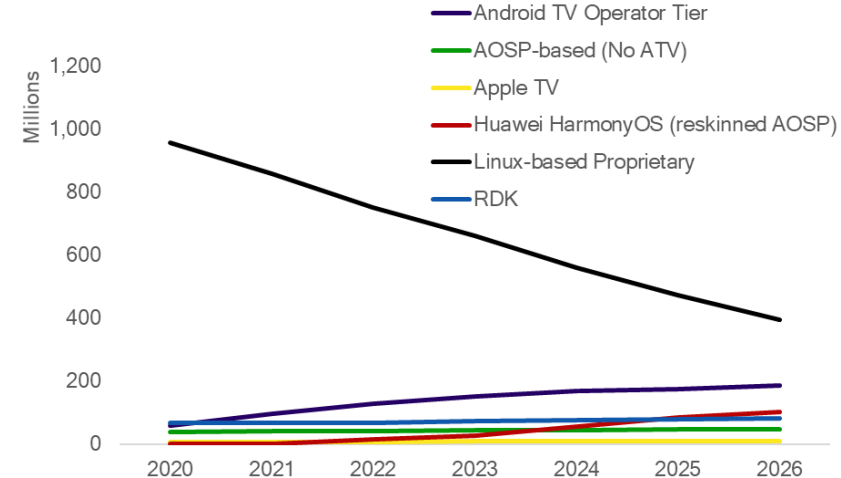 As this happens, the analyst said operators will likely ditch resource-thirsty legacy Linux-based proprietary set tops as their footprint of pay-TV homes starts to decline around the world, with the market share such systems falling from around 85% in 2020 to 48% in 2026. This transformation will also see a global uptick in Android TV and HarmonyOS in not only the shrinking footprint of operator set tops but also what Rethink says will be the “ballooning” number of smart TVs and CTV devices. RDK is also expected to make some progress in Europe and keep hold of the US market.

Rethink calculates that globally, Android TV Operator Tier will grow from around 5% of the installed operator set top base to some 23%, in 2026. RDK, meanwhile, is only expected to grow from 6% to 10%, even with interest from Tier 1 operators in Europe. The analyst noted somewhat archly that almost doubling a footprint would normally be a cause for celebration, but when compared with Android TV Operator Tier’s success, it is not as emphatic.

The study also forecast that Linux is also set to decline in the world of smart TVs and CTV devices, as LG’s WebOS, Samsung’s Tizen and Roku’s platform lose ground to the rise of Android TV and Huawei’s HarmonyOS. This says Rethink will also drive out Chromecast and AOSP-based installations, with former’s decline catalysed by a decline in demand for CTV devices as device replacement cycles lead smart TVs become the standard first screen in the home.

In the report, Rethink calculates that Android TV is set to reach 25% share of smart TVs and connected TV Devices by 2026, representing an estimated 236 million of a total 905 million devices. Yet it also said that perhaps the standout feature of its findings was the rise of HarmonyOS, due to the trade dispute between China and the US, with resulting concerns over access to Android updates.

The analyst expects in the short term that Huawei and others would continue to favour Android for set top and other connected devices, including smartphones and tablets – leading to growth in China for Android, initially. However, the likely longer-term direction is towards HarmonyOS as a ubiquitous cross-platform OS that will also increasingly take on Android in neutral markets outside China – especially in APAC and Latin America.