Mortal Kombat, GvK drive HBO Max to Q2 streaming leadership | Ratings/Measurement | News | Rapid TV News
By continuing to use this site you consent to the use of cookies on your device as described in our privacy policy unless you have disabled them. You can change your cookie settings at any time but parts of our site will not function correctly without them. [Close]

Analysis from streaming search engine Reelgood has revealed very clearly the way in which HBO Max’s investment in leading film has taken the direct-to-consumer service to the top of US streaming charts in the second quarter of 2021. 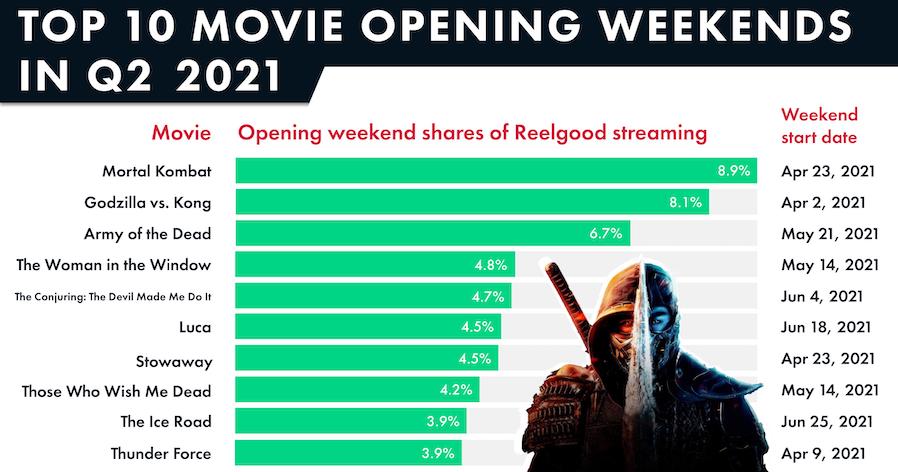 In its study, Reelgood analysed data for all of the films that premiered in Q2 2021 from 1 April 1 to 25 June and ranked the leading ten titles that had the biggest opening weekend shares of streaming and engagement among its two million monthly users in the US.

The analyst noted that fundamentally, in an effort to grow and retain their subscriber bases, subscription video-on-demand (SVOD) services such as HBO Max, Netflix and Disney+ debuted what it said was “an astronomical” amount of blockbuster movies in the quarter.

It also found that HBO Max's day-and-date releases were the most popular, which the analyst said should come as no surprise since the streamer has been making their buzziest offerings – that is Mortal Kombat, Godzilla vs. Kong - available to all subscribers at no extra cost. Netflix also made what it said was a “great showing” with Zack Snyder's Army of the Dead, The Woman in the Window, and its most recent release, The Ice Road.

Even though Disney+ continued to invest more in their TV show assets such as Loki and Star Wars: The Bad Batch, the service's latest movie release (without Premier Access) still made it to the sixth spot on the Reelgood list.