Tour de France speeds off on Eurosport and GCN | Deals | News | Rapid TV News
By continuing to use this site you consent to the use of cookies on your device as described in our privacy policy unless you have disabled them. You can change your cookie settings at any time but parts of our site will not function correctly without them. [Close]

Tour de France speeds off on Eurosport and GCN

Discovery’s leading sports brands Eurosport and GCN will cover every stage of the Tour de France this year in more than 60 markets across Europe and Asia. 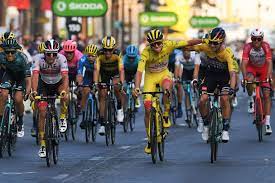 They will offer live, on-demand and ad-free coverage of Le Tour via digital platforms the Eurosport App and GCN+. For the first time, Discovery’s global streaming service, discovery+, will also show all the action via Eurosport with Eurosport 1 also offering live broadcasts of every stage.

With three Tour de France titles between them, Eurosport and GCN’s expert commentators Sir Bradley Wiggins and Alberto Contador have returned to offer insights to viewers in the UK and Spain respectively. The ‘Brad on a Bike’ feature returns for 2021 too, with Wiggins and Bernie Eisel reporting live from the heart of the peloton.

Alongside the live action, local post-race analysis shows will return for viewers across Europe including The Breakaway, which will be shown in multiple markets for the first time (UK, Nordics and the Netherlands) as well as GCN’s World of Cycling and Racing News shows, Les Rois de la Pédale (France) and La Montenera (Spain). Eurosport’s number one podcast, The Bradley Wiggins Show also returns, discussing the biggest movers and shakers from key stages, while three new episodes of Eurosport and GCN’s The Cycling Show will be released each Tuesday throughout the Tour featuring exclusive interviews and guests including 2017 green jersey winner Michael Matthews.

GCN+ will offer subscribers exclusive content and original documentaries, both online and via the GCN app. This includes two new episodes from its Legend series, with documentaries on 2010 winner Andy Schleck and eight-time stage winner Fabian Cancellara; 1903 which relives the first stage of the first Tour on original bikes; Colnago and The Jersey - both of which explore the prestige and history of Le Tour through iconic brands and design. Three new documentaries will also debut for Le Tour: The Tom Simpson Story, The Greatest Grand Tour Climbs, and Ventoux.

Scott Young, SVP content and production at Eurosport, said: “With the Grand Départ just days away, we’re gearing up for the most comprehensive coverage of the Tour de France anywhere by harnessing the full power of Eurosport, GCN and discovery+ to excite and entertain viewers everywhere.

“We’re looking forward to having Brad and Bernie back on the bike, offering viewers an innovative and unique insight to life in the peloton, as well as dissecting the drama of each stage through our local analysis and highlights shows. This year, the action doesn’t end at the Champs-Élysées and with the Olympic Games Tokyo 2020 following just a week after we find out who takes home the yellow jersey, there is so much racing and so many stories to look forward to over the coming weeks.”