SVOD stacking gets higher in North America | Media Analysis | Business | News | Rapid TV News
By continuing to use this site you consent to the use of cookies on your device as described in our privacy policy unless you have disabled them. You can change your cookie settings at any time but parts of our site will not function correctly without them. [Close]

Research from Ampere Analysis has revealed the new face of the media market in the US and Canada with subscription video-on-demand (SVOD) and social media on the rise, and with super stacking a particular phenomenon in the former territory. 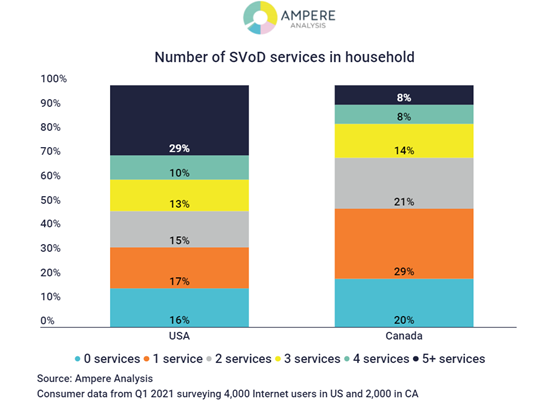 Original content was revealed as the driving the trend for SVOD stacking, especially in the US where almost half (49%) say original content is the main reason they subscribe, compared to 38% in Canada. Engagement with specific services also differed between countries. It found that while uptake of Netflix is comparable in both markets, 61% of respondents in Canada report watching Netflix in the last month, compared with 43% in the US. Ampere observed that higher levels of competition among streamers in the US has meant that consumers are now spending less time watching content on each of the services they have access to.

One difference between the two countries displayed in the report was that TV formed a bigger part of social interactions in the US than in Canada. Daily use of social media broke down 71% to 69% in the US and Canada respectively, and those in the US are much more likely say social media is important to them (54% vs. 45%).

Internet users in the US are more likely to see watching TV as a communal activity, with 48% respondents saying it is important to them to watch TV with other people in their household. This has risen from 42% in the first quarter of 2020, most likely driven by increased time indoors due to the pandemic. In comparison, 38% respondents in Canada see watching TV with their household as important. This has been stable over the last 12 months.TV was also seen as an important driver of conversation in the US, with 56% respondents saying TV gives them something to talk about with others, compared to 49% in Canada.

“As we’ve seen in Europe, there are some big differences in the way people consume TV depending on where they live,” commented Annabel Yeomans, senior analyst at Ampere Analysis. “In the US, TV is a much more important part of daily life and plays a greater role in social interaction than in Canada. Competition among streaming services is also more significant in the US than in Canada. In the last six months, we have seen that this not only impacts stacking rates, but also the growing demand for quality original content as streamers battle to engage subscribers and reach new audiences.”