Mel Giedroyc: Unforgivable returns for second series on Dave | Programming | News | Rapid TV News
By continuing to use this site you consent to the use of cookies on your device as described in our privacy policy unless you have disabled them. You can change your cookie settings at any time but parts of our site will not function correctly without them. [Close] 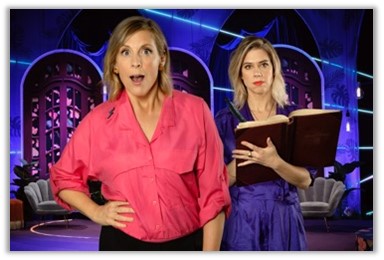 Produced by Expectation the programme sees comics and celebrities compete to convince Mel Giedroyc that they are the most unforgivable person in the room.

Giedroyc said: "I am utterly thrilled to be taking to the Unforgivable dais once more… (I love the word “dais”. It’s almost as good as “plinth”). It’s going to be an absolute cracker of a second series. I know that because I manifested it this morning.

“We’ll be welcoming in a whole roster of deliciously naughty, mucky guests, and expect some big surprises coming out of our booth too. Sadly, we will be saying goodbye to the drone. Boring old Ofcom, eh? Just a word of explanation. For those viewers who have confused this series with the film Unforgiven, much as I do have a lot in common with the story of an aging outlaw and killer who takes on one more job years after he'd turned to farming, I am Mel Giedroyc, a perimenopausal lady from Leatherhead, not Clint Eastwood, the multi-Oscar winning octogenarian hottie.”

Comedian Lou Sanders returns as Mel’s sidekick as she and Mel encourage the guests to dredge up their most outrageous sins, lies, legal transgressions and morally bankrupt behaviour.

Sanders added: “Cutie pops and sweetie pie back together at last - just like the nation demanded! Can't believe this series is going to be underwater – wait, unless that was a prank?”