US OTT subscriptions soar as NFL deal turbo charges Prime Video | Media Analysis | Business | News | Rapid TV News
By continuing to use this site you consent to the use of cookies on your device as described in our privacy policy unless you have disabled them. You can change your cookie settings at any time but parts of our site will not function correctly without them. [Close]

Two studies from Parks Associates have shown just how strong the current US OTT sector with penetration approach diffuse levels in US broadband homes and has also shown the vital importance of compelling content in driving uptakes, as exemplified by the Amazon Prime Video SVOD service. 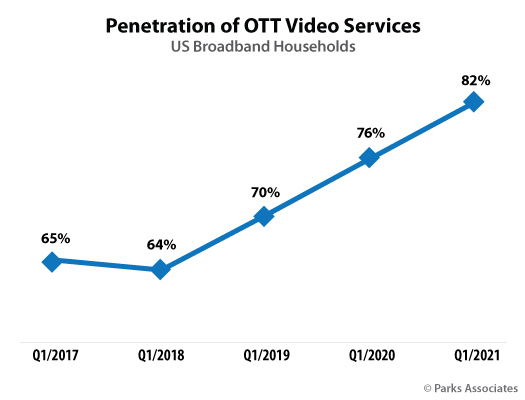 The Parks research also found that 55% of pay-TV households consider live sports important in their decision to keep their service. More than two-thirds of online pay-TV subscribers and 43% of traditional pay-TV subscribers who cancelled their pay-TV service during Covid-19 were likely to re-subscribe following the return of live sports.

And it is the opportunity presented in this real that Amazon Prime Video is taking advantage. The Parks OTT Video Market Tracker showed that 47% of US broadband households currently subscribed to Amazon Prime Video. Moreover, the company predicts that the landmark content rights deal between Amazon Prime Video and the NFL, reportedly worth $1 billion annually, will help increase the service’s subscription uptake and regular viewers through exclusive rights to stream Thursday night football games.

Parks says that the deal will boost advertising dollars, data captured and exposure to sports fans for Amazon’s streaming service. The NFL deal preceded Amazon’s merger with film studio MGM for $8.45 billion, an acquisition that the analyst says will help Amazon boost subscriptions to its Prime and Prime Video services with the addition of MGM’s IP, which includes the James Bond and Robocop franchises. Parks Associates estimates that 77.3 million US households are Amazon Prime members and that roughly 71% watch Prime Video, totalling nearly 55 million households in Q1 2021.

“In its first all-streaming package, the NFL inked a ten-year agreement with Amazon Prime Video for the streaming rights to fifteen Thursday Night Football games and one pre-season game per year in the US, beginning in 2022,” said Steve Nason, research director, Parks Associates.

“By offering live games, streaming services give the significant market of NFL fans a reason to subscribe. As OTT becomes an integral part of its strategy, the NFL is working to secure viewers, and profits, for the next decade, and the Amazon partnership represents an outstanding and unprecedented opportunity to set the stage for success. Traditional video is dwindling and a diversified distribution strategy is the only logical method of growing NFL viewership. While traditional players won’t see reductions to their coverage content, the lack of exclusivity over one of their biggest remaining assets will be detrimental to adding new viewers.”