The Irregulars’ lack of ‘stellar’ ratings cited for cancellation | Ratings/Measurement | News | Rapid TV News
By continuing to use this site you consent to the use of cookies on your device as described in our privacy policy unless you have disabled them. You can change your cookie settings at any time but parts of our site will not function correctly without them. [Close]

The Irregulars’ lack of ‘stellar’ ratings cited for cancellation

Netflix series The Irregulars finished its run with solid ratings and a welter of favourable reviews, but these have not been good enough to prevent the SVOD leader pulling the plug on the Sherlock Holmes spin off after one season. 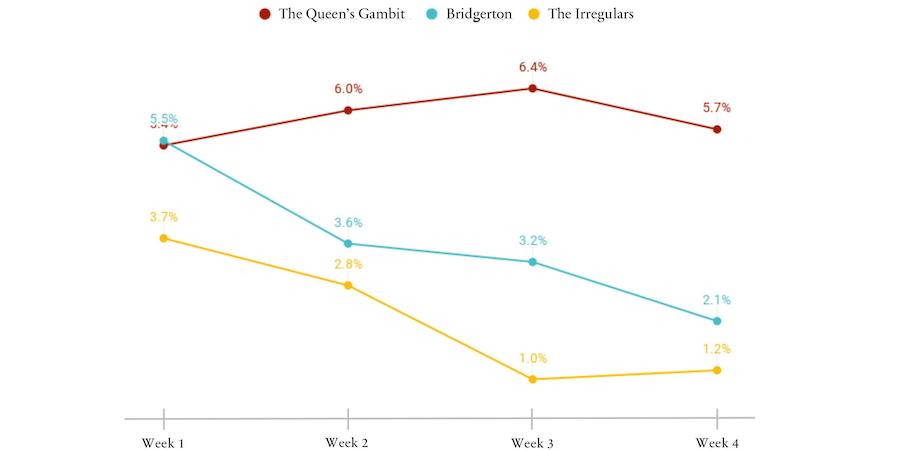 The cancellation has left many in the industry bemused but according to data released by the Reelgood film and TV streaming search engine service, while viewership for The Irregulars was decent it was nowhere close to the levels attained by Netflix's recent original TV shows. Namely Ginny & Georgia, Bridgerton and The Queen's Gambit.

Even though it acknowledged this was a rather high benchmark to match, Reelgood noted that Ginny & Georgia stayed on the #1 spot for 29 consecutive days, The Queen's Gambit for 22, and Bridgerton had two separate seven-day streaks. By contrast, The Irregulars, only stayed at the top spot for a day, then appeared on Netflix's list of daily Top 10 TV shows for only 17 more days before dropping off completely.

Looking at each title's shares of Reelgood streaming and engagement during their first four weeks, respectively, the analysis showed how interest for The Irregulars waned after the first two weeks, disappearing from the Top 10 TV shows list thereafter. The Queen's Gambit, notably, remained on Reelgood's list of the Top 10 most-watched TV shows across all US streaming services for 11 consecutive weeks.