Netflix, Amazon Prime and Hulu set sights on older viewers | VOD | News | Rapid TV News
By continuing to use this site you consent to the use of cookies on your device as described in our privacy policy unless you have disabled them. You can change your cookie settings at any time but parts of our site will not function correctly without them. [Close]

Even with streaming still surging since the outbreak of the pandemic, service uptake among the traditional younger audience for subscription video-on-demand (SVOD) is becoming saturated meaning services are now actively targeting the over 35s in their content commissioning strategies says research from Ampere Analysis. 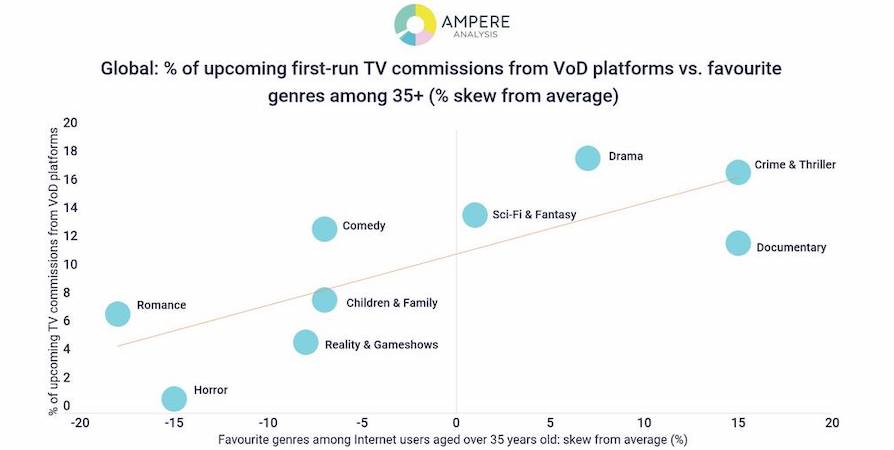 The analyst noted that the battle is now on with traditional services as this older demographic have long been linear TV’s core viewers and are now the attention of massive programming budgets.

Ampere suggested that this audience was more likely than average to enjoy documentaries, drama and crime and thrillers, which are now amongst the VOD players’ top five commissioned genres. Netflix is the largest VOD commissioner worldwide and has had a highly active start to the year, with more than 100 titles ordered between January and March. This said the analyst amounted to over a third of the number of titles ordered by the company over the entirety of 2020. In March, Netflix ordered more documentary titles than any other genre. Over half of these were true crime.

Yet Ampere also warned that there was work to do for the SVOD firms to convince older consumers to start streaming. It said that consumers who don’t engage with VOD in a typical day are 55% more likely to be aged 45-64.

In its study, Ampere classified TV viewers into no, low, medium and high users based on the time they spend watching TV or online video on a typical day. Medium viewers watch for two to four hours a day, and high viewers for more than four hours a day. 50% of medium linear TV viewers are over 45 years-old, with this group watching locally produced TV series ‘very often’. High linear viewers are in the same age range with 57% aged over 45+. They are driven by a love of sport and TV shows, with one third (35%) watching live sport ‘very often’.

These actions involved continuing to invest in factual and crime and thriller content; expanding the array of sports-related content on offer given sports rights are going to be an important part of any conversion strategy; competing with the local players more effectively, especially in those markets with historically high engagement with linear, and strong local content industries such as France, Germany and Japan.

“The fastest growth in uptake of VOD viewing is now in the 35–44-year-old age bracket. Nearly twice as many in this age group are now high VOD viewers compared with two years ago,” observed Minal Modha, principal analyst - consumer research lead at Ampere Analysis. “The laser-like focus on matching commissioning strategies with the favourite genres of the older demographics in question is evident, but to more fully compete with linear TV players, local language content is going to be key, as will some sports content, be it live or ancillary.”
Tweet