Europe’s TV viewing habits changing in four key ways | Media Analysis | Business | News | Rapid TV News
By continuing to use this site you consent to the use of cookies on your device as described in our privacy policy unless you have disabled them. You can change your cookie settings at any time but parts of our site will not function correctly without them. [Close]

Research by Ampere Analysis into the TV viewing habits of Internet households in Europe’s big five markets has revealed the rapid rate of change in the media landscape in the region with content binging and stacking streaming and pay-TV among the key trends. 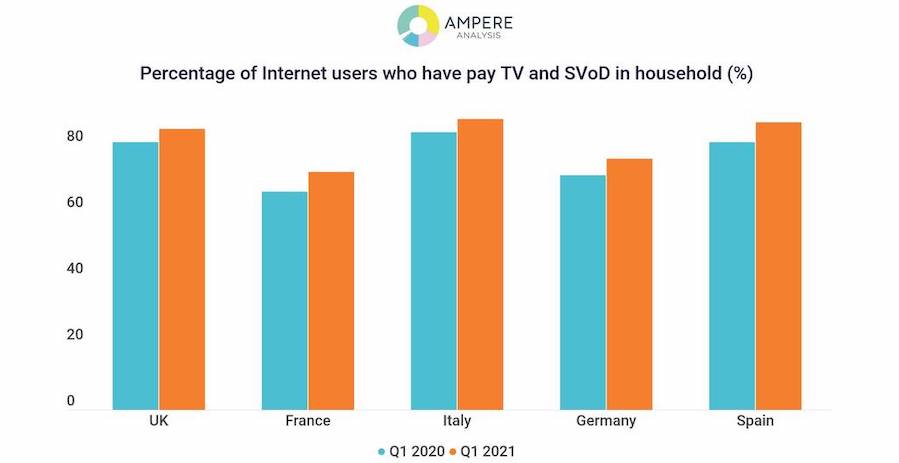 In the investigation of habits in UK, France, Italy, Germany and Spain, Ampere noted that streaming plus pay-TV was now the home TV viewing choice for many Europeans. On average, over 80% of pay TV households across the UK, France, Spain, Italy and Germany also subscribe to at least one streaming service. France saw the highest increase in uptake subscription video-on-demand (SVOD) in pay-TV households in the last year, with 72% of pay-TV households now also taking SVOD in Q1 2021, compared to 66% in Q1 2020.

Super Stacking was another phenomenon with the proportion of Internet households with three or more services continuing to rise.

When considering any streaming services that are being paid-for directly, borrowed, bundled in free or trial accounts, the UK comes out in front. 31% of UK Internet users have three or more services, closely followed by Spain at 28% and Italy at 27%. In Germany it’s 22% and in France it’s 16%.

SVOD services in Europe were found to be frequently used alongside broadcaster led catch-up (BVOD) services. A third of Internet users in the big five European markets reported watching both catch-up and SVoD services, although catch-up-only viewers were in the minority. Just 9% of Internet users watched catch-up services in a given month but did not use SVDD products. Just over a third reported using SVOD services alone. The UK was the strongest catch-up market in Europe, with almost half of consumers watching both SVOD and catch-up services. The UK was also the only market where the most-watched long-form streaming service was a local broadcaster’s catch-up platform, with the BBC iPlayer ahead of Netflix.

Commenting on the report, Ampere Analysis senior analyst and study author Annabel Yeomans said: “As online viewing increases in popularity in Europe, BVOD platforms can reach younger audiences who are not engaging via linear. However, to do this, they will have to change commissioning strategies to ensure they are providing content which appeals to this demographic. This may include online only content or genres which would not traditionally align with their linear platforms. If they do not pivot, they could lose further ground to SVOD services.”