First Extreme E X Prix draws in 18.5 million TikTok views | Social TV | News | Rapid TV News
By continuing to use this site you consent to the use of cookies on your device as described in our privacy policy unless you have disabled them. You can change your cookie settings at any time but parts of our site will not function correctly without them. [Close]

TikTok has been the social media breakout star of 2020 and is now seeing use with major sporting events, and in the latest example the platform has found to have pulled in 18.5 million organic views for the inaugural X Prix of the Extreme E electric off-road racing series. 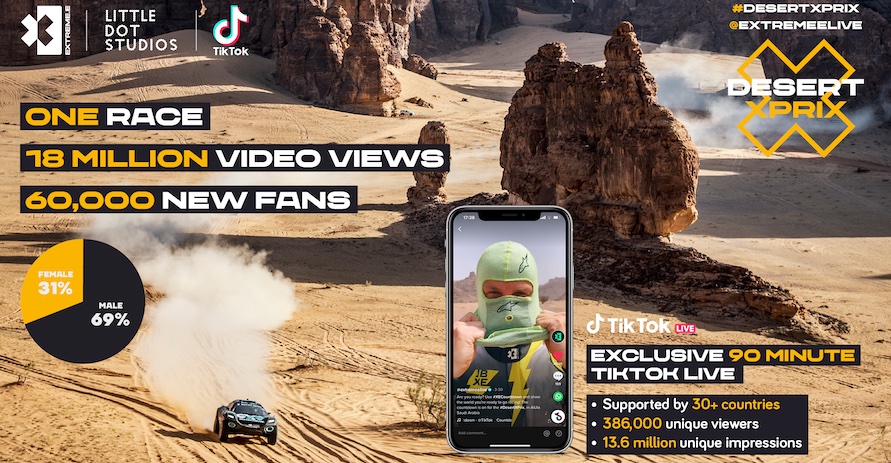 Extreme E aims to highlight the climate emergency that is affecting the whole world. By visiting five remote destinations this year, beginning with Saudi Arabia, followed by Senegal, Greenland, Brazil and Patagonia – all of which have been affected by the climate crisis - the series will shine a spotlight on the devastation caused by environmental issues, and encourage change, whilst leaving behind a long-lasting positive impact through its legacy programmes. Racers compete in an all-electric SUV, Odyssey 21, to promote the capabilities of e-mobility.

Prior to the event which ran in the Saudi Arabian desert, the championship signed an agreement with TikTok to bolster its social media offering. Across the race weekend on 3 and 4 April, Extreme E pulled in 18.5 million organic views across TikTok content produced by partner Little Dot Studios. 17.2 million people checking out #DesertXPrix videos alone. The championship also acquired 60,000 new fans, after digital media firm Little Dot Studios activated the new partnership utilising its vertical video expertise, on behalf of the championship.

As part of the partnership which covers all five Extreme E X Prix in 2021, Extreme E and Little Dot Studios created an exclusive 90-minute production, which aired on Extreme E’s TikTok account on 3 April. More than 386,000 people watched the show, which gave a behind the scenes look at the series and the personalities at the heart of it. One of the most popular videos was The Drop – a part of the course measuring 100 metres with a 45 degree descent. The on board video gave a view from the cockpit and 3.8 million fans tuned in to see exactly what the driver saw as they took on this challenging element of the course.

“These numbers are phenomenal and I’m thrilled that in our first weekend we were able to reach so many people with our unique sport for purpose,” said Ali Russell, chief marketing officer at Extreme E. “As part of the championship’s mission to keep carbon emissions to a minimum we don’t have spectators on site, and if we did, we would never reach this level of engagement purely from attendees. It just goes to show how important our digital offering is. A massive thank you to TikTok, Little Dot Studios and our in-house social team, these numbers are awesome and a testament to the engaging and innovative motorsport series we have created.”
Tweet