SABC gets into gear with Extreme E | Deals | News | Rapid TV News
By continuing to use this site you consent to the use of cookies on your device as described in our privacy policy unless you have disabled them. You can change your cookie settings at any time but parts of our site will not function correctly without them. [Close]

SABC gets into gear with Extreme E

Just a week after the initial race in the electric car racing series, Extreme E has confirmed today that the South African Broadcasting Corporation (SABC) will televise all of the remaining X Prix live on its linear channels, SABC1, SABC2, SABC3 and SABC Sport Channel. 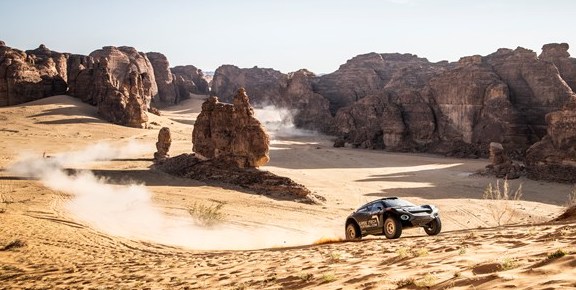 As well as highlighting a variety of environmental issues including, desertification, rising sea levels, glacier retreat, deforestation and ice melt, the series hopes to raise awareness of the climate emergency by mixing sport with purpose to inspire change. Extreme E aims to leave behind a long-lasting positive impact through its legacy programmes and showcase the performance of all-electric vehicles in extreme conditions, promoting their adoption of electric vehicles in the quest for a lower carbon future for the planet.

Some of the biggest names in motorsport have founded teams including Formula One World Champions Lewis Hamilton and Nico Rosberg with teams X44 and Rosberg X Racing respectively. Fellow Formula One star Jenson Button has not only founded a team – JBXE – but will also be behind the wheel. Teams will be gender balanced.

Following the inaugural race in Saudi Arabia, 4 the series will subsequently visit Senegal (29-30 May), Greenland (28-29 August), Brazil (23-24 October) and Patagonia (11-12 December). The broadcast deal with Johannesburg-based SABBC means audiences in South Africa will gain free to air access to Extreme E’s race coverage as well as its behind-the-scenes magazine show and documentaries - Climate Changers, How to Build a Race Car and Best of Extreme E. In addition, series coverage will be accessible on SABC’s digital platforms SABC Sport Portal, Telkom One OTT Platform and OpenView.

“I believe the future of motorsport starts here with Extreme E, and SABC Sport is absolutely thrilled that we will be able to deliver this great new concept to our viewers on our channels,” remarked SABC head of sport Gary Rathbone. “The fact that its’ focus goes way behind merely racing but delves deep into issues around the environment and the future of our planet's ecology makes Extreme E vital viewing in more ways than one.”

Explaining why bringing the race series to South Africa was so appropriate, Extreme E noted that the country already deals with a host of environmental challenges. Climatically sensitive and was based in a region already suffers from severe air pollution with 77% of the energy produced in the country from coal, leading in turn to dramatic deforestation. on a scale equal to 20 football pitches being lost every minute.

“The impacts of climate change can be devastating, and nowhere is that clearer than in this region, where increasing deforestation and heavy use of fossil fuels is threatening an already fragile environment,” observed Extreme E chief marketing officer Ali Russell. “Today’s agreement with SABC will allow Extreme E to reach a huge South African audience with our sport for purpose series. Our championship is so much more than just exciting electric racing, it’s the opportunity to raise awareness of climate change and highlight ways that we can call live a less carbon-intensive lifestyle to protect our planet.”

In addition to SABC, Extreme E will be available from over 40 global broadcasters such as Tencent,Tencent, ITV, FOX Sports, Insight TV, Eurosport and ESPN, covering regions including North America, Asia and Europe.