This TV expands distribution across ABC subchannels | Deals | News | Rapid TV News
By continuing to use this site you consent to the use of cookies on your device as described in our privacy policy unless you have disabled them. You can change your cookie settings at any time but parts of our site will not function correctly without them. [Close] 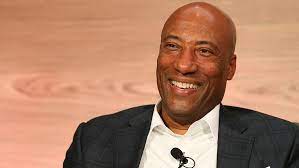 Byron Allen, founder/chairman/CEO of Allen Media Group/Entertainment Studios, said: "Allen Media Group’s over-the-air broadcast television network This TV is now well-positioned for greater success with the addition of these eight phenomenal ABC owned and operated broadcast television stations. As we continue to invest substantial amounts of capital into the programming, marketing, and distribution of THIS TV and our portfolio of eleven networks, we remain strong believers in over-the-air broadcasting and free-streaming direct-to-consumer platforms.”