Amazon overtakes Samsung to reach connected TV top spot | Media Analysis | Business | News | Rapid TV News
By continuing to use this site you consent to the use of cookies on your device as described in our privacy policy unless you have disabled them. You can change your cookie settings at any time but parts of our site will not function correctly without them. [Close] 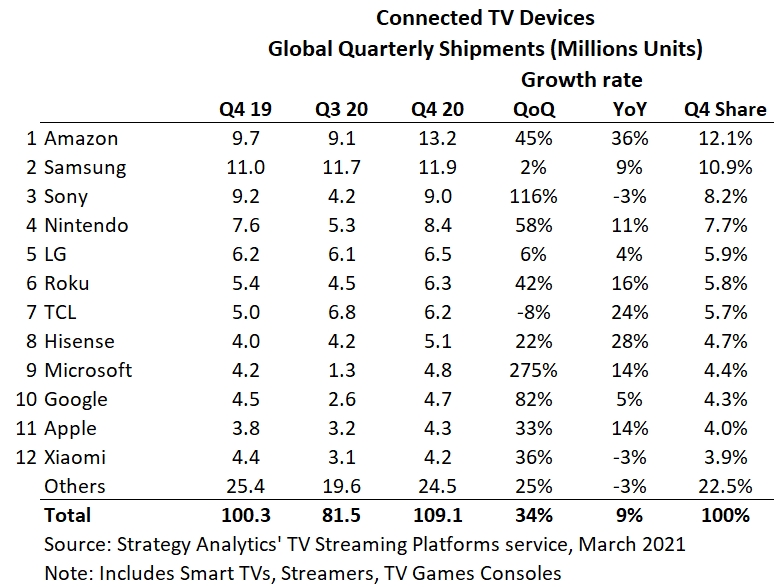 According to the report, Amazon became market leader for the first time with sales of 13.2 million devices and a market share of 12.1%, overtaking Samsung, which slipped into second place while Sony remained third after the launch of its new PS5 games console.

This comes as connected TV was revealed to be the fastest-growing YouTube platform.

2020 sales of both smart TVs (186 million) and media streamers (81 million) reached new records. TCL performed particularly well in smart TVs in 2020, moving into second place behind Samsung and ahead of LG. In streamers, Amazon and Roku extended their lead over both Google and Apple and together now account for more than 60% of the streamer market.

David Watkins, director, TV streaming platforms, at Strategy Analytics, commented: “Q4 is always a strong period for home entertainment products, and in spite of the pandemic, 2020 didn’t disappoint. Demand for connected TV devices remained strong throughout the holiday period as consumers in most major economies preferred to enjoy streaming video services on their big screens.”

Added senior analyst Edouard Bouffenie: “Amazon has had great success with its Fire TV Stick 4K, which became the world’s best-selling digital media streamer device in 2020. However, the market remains fragmented overall and there is still a long way to go in the battle to build global-scale TV streaming platforms during the 2020s.”