BRAVIA XR A80J OLED TVs now on offer | 4K/UltraHD | News | Rapid TV News
By continuing to use this site you consent to the use of cookies on your device as described in our privacy policy unless you have disabled them. You can change your cookie settings at any time but parts of our site will not function correctly without them. [Close]

Sony has announced that it will shortly take pre-orders for its BRAVIA XR A80J 4K HDR OLED TVs and X80J/X81J 4K LED TVs. 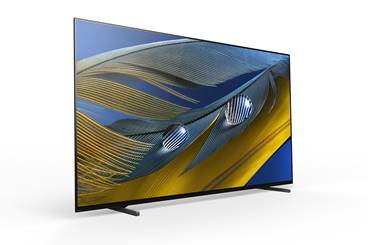 The former are part of the BRAVIA XR line-up based on the new Cognitive Processor XR, which employs what is said  to be a completely new processing method going beyond conventional AI, designed to replicate the ways humans see and hear.

Sony says its Cognitive Processor XR, powered by cognitive intelligence, divides the screen into numerous zones and detects where the focal point is in the picture. While conventional AI can only detect and analyse picture elements like colour, contrast and detail individually, the Cognitive Processor XR can cross-analyse an array of elements simultaneously, just as our brains do. By doing so, all elements are adjusted in conjunction with each other for best final outcome, so everything in the scene is synchronised and lifelike – something that conventional AI cannot achieve.

The Cognitive Processor XR can also analyse sound position in the signal so the sound matches precisely with what’s on the screen. In addition, it upconverts any sound to 3D surround sound, to deliver an immersive soundscape. Sony says it learns, analyses and understands unprecedented amounts of data and intelligently optimises every pixel, frame and scene for the most lifelike picture and sound that Sony says it has ever delivered on its TV range.

BRAVIA XR A80J 4K HDR OLED TVs feature the BRAVIA CORE service. Pre-loaded on all new BRAVIA XR models, users can access a selection of the latest SPE premium and classic titles and what is claimed to be the largest IMAX Enhanced collection. BRAVIA CORE is also the first in the industry to feature Pure Stream technology, achieving near lossless UHD BD equivalent quality with streaming up to 80 Mbps.