Extreme E inks deal with TV2 Hungary | Deals | News | Rapid TV News
By continuing to use this site you consent to the use of cookies on your device as described in our privacy policy unless you have disabled them. You can change your cookie settings at any time but parts of our site will not function correctly without them. [Close]

With the launch event almost exactly a month away, the Extreme E, the all-electric off-road racing series, has  confirmed Hungary’s entertainment station TV2 will broadcast all five of this season’s X Prixs on its free-to-air linear channels, TV2, SuperTV2, Spiler 1 and Spiler 2. 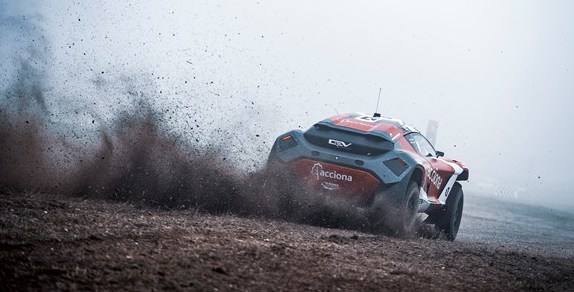 The series will feature electric SUVs competing in extreme environments around the world – in Saudi Arabia, Senegal, Greenland, Brazil and Patagonia, places which have all been affected by the climate crisis - and is geared towards highlighting the impact of climate change and human interference in some of the most remote parts of the world. As well as highlighting a variety of environmental issues including, desertification, rising sea levels, glacier retreat, deforestation and ice melt, the series hopes to raise awareness of the climate emergency by mixing sport with purpose to inspire change. Extreme E aims to leave behind a long-lasting positive impact through its Legacy Programmes and showcase the performance of all-electric vehicles in extreme conditions, promoting their adoption of electric vehicles in the quest for a lower carbon future for the planet.

Extreme E’s first X Prix will take place on 3 April in the deserts of Saudi Arabia. Some of the biggest names in motorsport have founded teams including Formula One World Champions Lewis Hamilton and Nico Rosberg with teams X44 and Rosberg X Racing respectively. Fellow Formula One star Jenson Button has not only founded a team – JBXE – but will also be behind the wheel.

In this latest of a number of key broadcast deals, the Budapest-based broadcaster will air Extreme E’s race highlights, review and magazine shows – all in Hungarian – and coverage will also be available on its digital platforms www.tv2.hu and www.spilerextra.hu.

Commenting on the deal, Gabor Fischer, director of programming, TV2 Group said : “The world of motorsport is changing extremely fast. Extreme E is a brand new series with a clear purpose: to highlight the problems caused by the global climate change. We are very proud that we can broadcast this highly innovative championship in Hungary as the partner of Extreme E. The events themselves will be broadcasted on our sports channels, Spiler 1 and Spiler 2, while the magazine programme, complete with behind-the-scenes footage will be shown on our main free-to-air commercial channel, TV2. We are especially delighted to have Zoltan Szujo on board, the best known motorsport pundit in Hungary, who will be the host and the voice of our Extreme E coverage."

Ali Russell, chief marketing officer at Extreme E, added: “TV2 is well-known as Hungary’s top entertainment channel so we are delighted that it will be broadcasting Extreme E’s exciting racing concept as well as airing the vital environmental cause behind the series. Hungarians clearly have concerns about environment and the need to change behaviour to reduce carbon emissions, which is one of Extreme E’s key messages. Coupled with the championship’s race format and gender equal platform, I am confident TV2’s audiences will fully engage not only with the racing, but also the wider storytelling around electrification and the need for all of us to take care of our planet.”