Streaming services gain at licensed content’s expense | Media Analysis | Business | News | Rapid TV News
By continuing to use this site you consent to the use of cookies on your device as described in our privacy policy unless you have disabled them. You can change your cookie settings at any time but parts of our site will not function correctly without them. [Close]

In what it says comes as no surprise, research from Reelgood has revealed that the leading subscription streaming services in the US have over the last twelve months been steadily increasing their catalogues of original TV shows at the expense of licensed content. 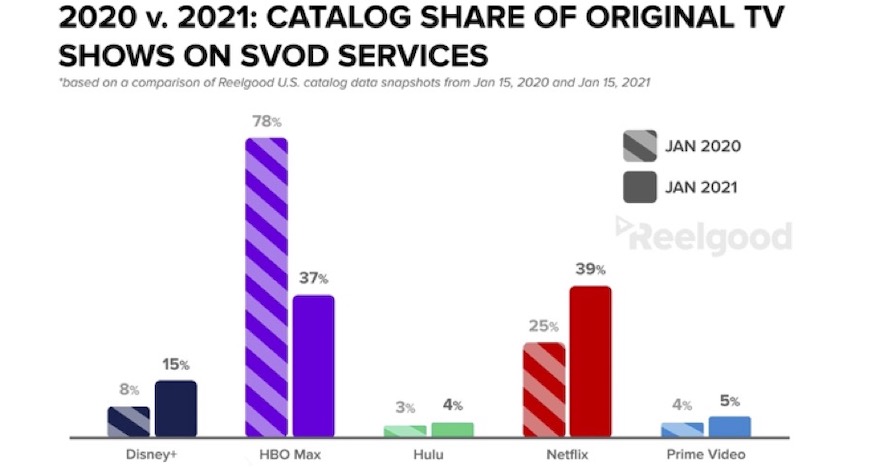 And in what comes as even less as a surprise, said the film and TV streaming search engine service, Netflix was by far the biggest grower with original series making up 39% of its TV shows catalogue for the last twelve months up 14 percentage points from last year. In general, In an effort to retain and acquire new users, the leading subscription video-on-demand (SVOD) platforms were found to be working to maintain a high percentage of content in their libraries that cannot be found elsewhere.

By contrast, the report found that AVOD and TVOD platforms enjoyed the most growth in terms of content catalogue this year, with growth in the AVOD sector mostly driven by Tubi TV, Vudu Free, and the launch of Peacock's free tier.

The study also revealed that while Amazon Prime Video claimed the tile for having the largest number of films and TV shows, Netflix, Hulu and HBO Max were quickly catching up in terms of quality streams for every dollar of their respective subscription costs.

In its research, Reelgood also discovered that by genre, feel-good family-friendly content had been the key to success during the pandemic while straight-to-VOD films premieres more than tripled in the fourth quarter year-on-year.