Netflix set for further US viewer surge to 2024 | VOD | News | Rapid TV News
By continuing to use this site you consent to the use of cookies on your device as described in our privacy policy unless you have disabled them. You can change your cookie settings at any time but parts of our site will not function correctly without them. [Close]

Netflix set for further US viewer surge to 2024

Even though it is considered one of the most mature markets in the world, the US subscription video-on-demand (SVOD) industry is still showing impressive growth and a big slow down in subs in the country is unlikely says a study from financial analyst Trading Platforms. 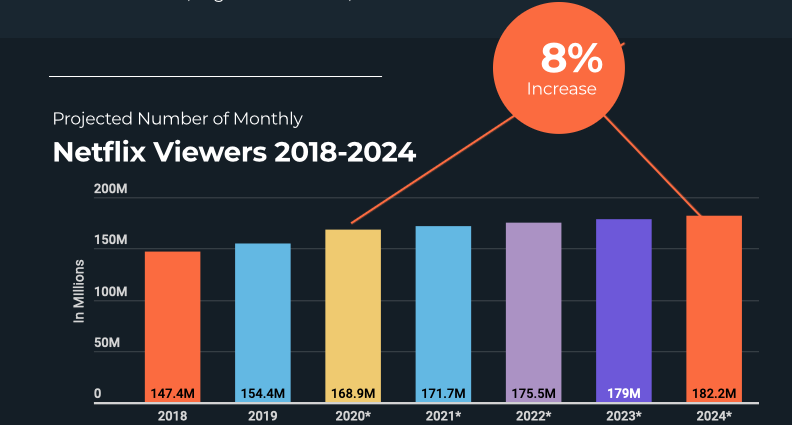 The study naturally shows Netflix at the top of the food chain already and indicates that the SVOD leader and rivals are showing no signs of slowing down. Netflix’s recently published fourth quarter results showed that it had 66 million US customers and Trading Partners says that the number of people who watch the service at least once a month was 168.9 million at the end of 2020. It projects that this number will rocket to 182.2 million viewers by 2024. In terms of paying subscribers, Trading Partners expects Netflix to grow a further 16%, with a projected 71 million US subscribers in 2025.

Yet while Netflix is set for this growth, snapping at its heels will be a number of keen rivals. Amazon Video was the second-largest SVOD provider in 2020 with 106.6 million monthly viewers, with Hulu third on the list with 94.5 million monthly viewers. Yet perhaps the most interesting growth was shown by Disney+ which finished 2020 with 72.4 million people tuning in at least once a month making it the fourth biggest SVOD provider in the US in 2020. This is the biggest debut year by an SVOD provider in the industry’s history.