OTT, mobile services drive TV markets in Central Asia | Media Analysis | Business | News | Rapid TV News
By continuing to use this site you consent to the use of cookies on your device as described in our privacy policy unless you have disabled them. You can change your cookie settings at any time but parts of our site will not function correctly without them. [Close]

Looking at the evolution of TV markets over the past three years in a region with a total of 77 million inhabitants, analyst Dataxis says that it has observed growing opportunities for operators and broadcasters in Central Asia. 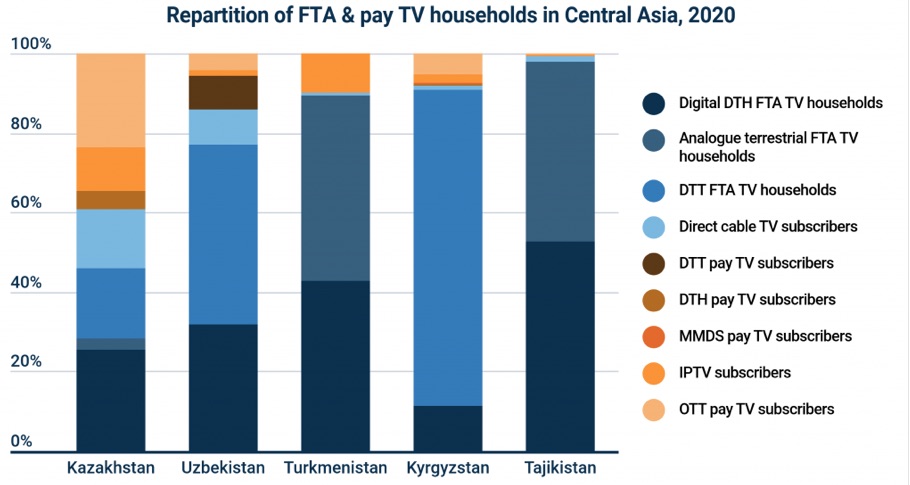 While the analyst noted that local political, geographical and economic contexts have constrained the development of wireline and wireless connections over the last two decades, and that local markets were currently dominated by state-backed entities, it said that times were changing.

It observed that as mobile operators in the region are getting more and more data subscribers, they are developing additional services including video-on-demand and OTT pay-TV plans for mobile devices. In Kazakhstan, mobile OTT pay-TV was seen to be leading the growth of the pay-TV segment. Kcell’s OTT service, branded MobiTV, was launched at end 2016 and reached 850 000 paid subscribers at Q3 2020, more than 10% of its mobile subscriber base. Veon also launched a mobile OTT, BeeTV, in its operative markets in 2019 through a partnership with Russian streaming service leader Ivi. In Kyrgyzstan, mobile operator O! launched a similar offer in 2016, and Megacom launched MePlay last year.

In addition, Dataxis noted in its research that the development of fixed wireline broadband connections is enabling operators to develop IPTV services. It pointed out that in Uzbekistan, where the broadband market is highly fragmented between several tens of internet provider services, most operators are offering interactive TV services through broadband connection for 10 to 30% of monthly internet subscription fees. To keep up with this increasing competition, legacy cable operators also started offering broadband and IPTV services for the last four years, like Spectr-IT, Stark-TV, Freelink or Avianet. In Kazakhstan, IPTV already reaches a tenth of TV households.

TV networks in the area are dominated by state-owned or state-backed companies whose owners are often related to the administration’s officials. However, new opportunities were found to be emerging for broadcasters. In Uzbekistan for example, private networks were virtually non-existent until 2016 but since then several local private channels now broadcast on free TV bouquets. Sevimli TV, Z’or TV and Milliy TV for example were launched between 2016 and mid 2017. TV viewing ratings showed that those networks were more popular in 2019 than national state-owned TV channels. Between 2016 and 2019, Uzbek broadcasters’ TV advertising revenues have more than doubled in local currency.