Veloce Racing confirms Stéphane Sarrazin for inaugural Extreme E season | VOD | News | Rapid TV News
By continuing to use this site you consent to the use of cookies on your device as described in our privacy policy unless you have disabled them. You can change your cookie settings at any time but parts of our site will not function correctly without them. [Close] 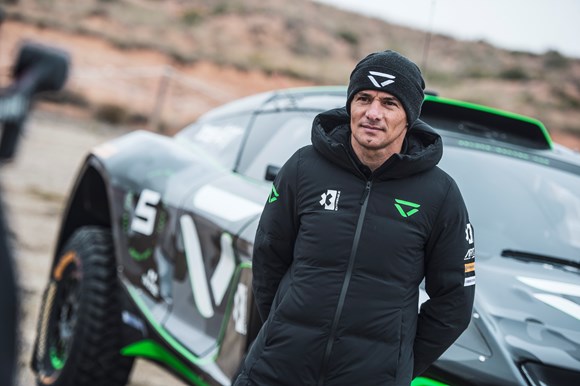 Extreme E is an off-road electric racing series that aims to highlight the world’s climate emergency. This year it will visit Saudi Arabia, Senegal, Greenland, Brazil and Patagonia – destinations that have all been affected by the climate crisis. Extreme E hopes to leave behind a long-lasting positive impact through its legacy programmes.

It has already announced the first technical production companies with whom it will work to provide the technology, expertise and global network to deliver what it says will be sustainable broadcasts.

Sarrazin is perhaps best-known for his sportscar racing exploits – his six podium finishes in the Le Mans 24 Hours, two Le Mans Series titles and multiple victories in the FIA World Endurance Championship to his name should serve him well in Extreme E.

In 1999, Sarrazin contested the Brazilian Grand Prix and continued to carry out Formula 1 testing duties until the end of 2002. Four seasons in the FIA Formula E Championship yielded three rostrum visits and 21 points finishes, while in 2011 and 2012, he tested his mettle in Australia’s V8 Supercars Championship.

Alejandro Agag, founder and CEO of Extreme E, said “A big welcome to Stéphane, who is a great driver signing for Veloce Racing. He brings with him a wealth of experience across a variety of motorsport disciplines and has some fantastic off-road capabilities that will serve him well on the different terrains of the five Extreme E races. I’m very much looking forward to seeing him, and his team-mate Jamie Chadwick, behind the wheel of the ODYSSEY 21 in the deserts of Saudi Arabia in April.”

Sarrazin added: “I am delighted to have agreed terms with Veloce Racing to contest the first season of Extreme E. This is a hugely appealing new series that has already attracted a lot of international attention – and all before the racing has even begun. As a driver, the concept is tremendously exciting and motivating – both on a competitive and personal level – and the challenge will be like no other. I’ve driven a lot of different types of car during my career, but the ODYSSEY 21 really is something special and it’s going to generate some incredible action. When we went testing together, it did not take me long to ‘click’ with the Veloce Racing guys – like me, they arrive in Extreme E with a lot of experience from different disciplines in the sport, and that can only be to our advantage over the forthcoming campaign. I can’t wait to go racing!”