Disney+ nips Netflix’s heels in app stakes | Ratings/Measurement | News | Rapid TV News
By continuing to use this site you consent to the use of cookies on your device as described in our privacy policy unless you have disabled them. You can change your cookie settings at any time but parts of our site will not function correctly without them. [Close]

Having smashed all expectations for downloads within the company since its launch barely a year ago, Disney+ has also performed very strongly by external benchmarks over 2020 according to research from Apptopia. 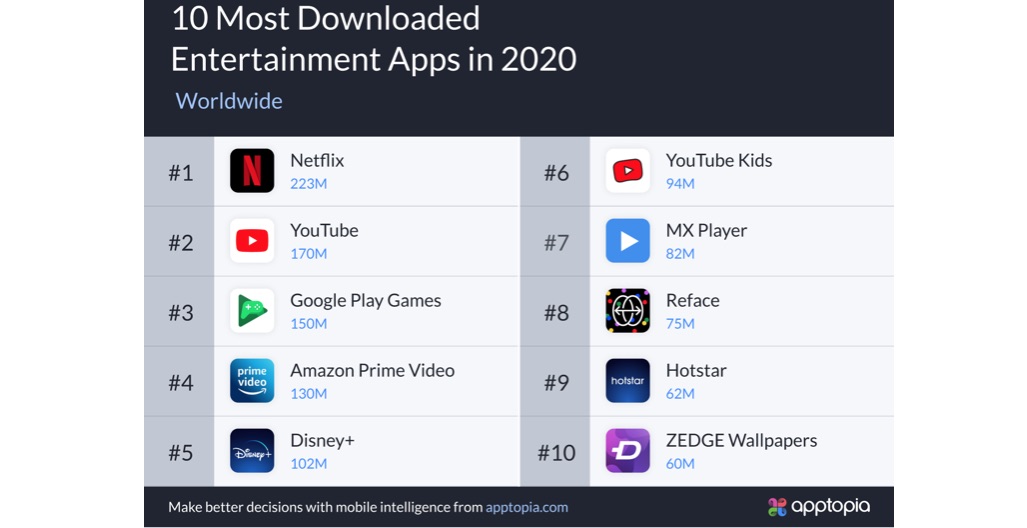 In its annual roundup of the app economy, Apptopia said in general that it had witnessed unprecedented changes in the app economy in 2020 as consumer behaviour shifted dramatically.

As far as total global downloads on iOS and Google Play devices, TikTok was top of the table with 850 million downloads over the year followed by WhatsApp on 650 million. Netflix only just sneaked into the top ten with 223 million downloads, muscled out not just by the top two but also a variety of popular social media and video conferencing apps. Yet looking at the US alone, Disney+ was the leading entertainment app in the US drawing 45 million downloads for eight place and squeezing out Netflix by 300,000 users.

Assessing the relative strengths of the two products in app form, Apptopia noted that Netflix continues to be a powerhouse but given that Disney+ was newer whether it would be the #1 downloaded Entertainment app if it were available in as many countries as Netflix. Disney+ did manage to beat out Netflix in the US by a small margin.

In terms of top grossing apps, YouTube was the top global video product taking $478 million for third place behind TikTok and Tinder. Disney+ was fourth overall grossing $314 million, followed by Tencent Video on $300 million. iQIYI and Netflix brought up the rear of the top ten with $240 million and $209 million respectively. In the US, YouTube was top dog drawing $249 million with Disney+ in third with $201 million, Hulu in seventh with $92 million, Netflix in eight with the same amount and HBO Max emerging after a short period of life in ninth with $81.3 million. In December 2020, Apptopia  calculated the new direct-to-consumer service as the fastest growing SVOD platform in the US.

Looking at the leading entertainment apps, globally Netflix took its usual market leading place with its 223 million downloads followed by YouTube on 170 million. the entertainment top ten saw Amazon Prime Video
draw 130 million, just a million ahead of Disney+. MX Player, a video on-demand app popular in India, hit 82 million downloads in 2020. The US chart saw Disney+ edge out Netflix with 45.2 million and 44.7 million, followed by Hulu on 40 million. These were some way ahead of fourth and fifth Hulu and Amazon Prime Video (31 million and 27 million respectively) and Tubi topped the AVOD players on 25 million. Roku racked up 23 million downloads, inching out HBO Max by 0.1 million. Pluto TV rounded out the top ten with 14.7 million.