Virgin Media reveals record-breaking 2020 for data usage | Ratings/Measurement | News | Rapid TV News
By continuing to use this site you consent to the use of cookies on your device as described in our privacy policy unless you have disabled them. You can change your cookie settings at any time but parts of our site will not function correctly without them. [Close]

Data released by Virgin Media has shown how during 2020 the consumption habits of its more than six million cable and mobile customers have shifted significantly, consuming a record-breaking amount of online data and tuning into more TV of all forms. 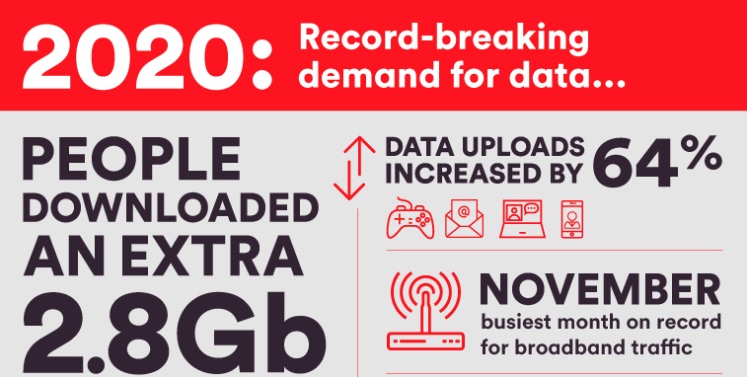 In all, Virgin Media said that customers downloaded an extra 2.8 GBytes of data per day on average in 2020, and between them burnt their way through 26,530 petabytes (26,530 million GBytes) of data in a record breaking year for broadband use.

Looking at TV, the data showed in 2020 that households spent an extra 21 hours on average watching TV each month. That said the provider was the equivalent of ten full days per year and enough to watch all four series of The Crown six times over. Traditional TV viewing on Virgin Media’s network was up by 8% in 2020, with the third episode of BBC’s Strictly Come Dancing being the most viewed TV moment of the year, squeezing out ITV’s I’m a Celebrity…Get Me Out of Here. Streaming and on-demand viewing time leapt by 26%, with Sky One’s Brassic topping the list of most popular boxsets, closely followed by Bulletproof, Code 404 and Manifest. April and May were record-breaking months for boxsets with nearly twice as many views when compared to 2019 (up 90%).

In terms of popular genres of programming, news channels saw the biggest increase since last year, customers turned to entertainment for some light-hearted relief. Paddington 2 was the most popular film on TV, while England’s victory over Ireland during the international football friendly on 12 November was the most viewed sports moment of the year to date.

“After an extraordinary year we’ve seen unprecedented demand for our services across the board; whether that’s broadband traffic, binge-worthy box sets or people picking up the phone to check in with friends and family,” commented Virgin Media chief operating officer Jeff Dodds. “Staying connected, informed, and entertained is more important than ever, and despite the additional demand and challenges we’ve faced this year, our network has played a key role in keeping the country connected to the things and people that matter most.”