RTVE taps TVU for cloud-based broadcast | Infrastructure | News | Rapid TV News
By continuing to use this site you consent to the use of cookies on your device as described in our privacy policy unless you have disabled them. You can change your cookie settings at any time but parts of our site will not function correctly without them. [Close] 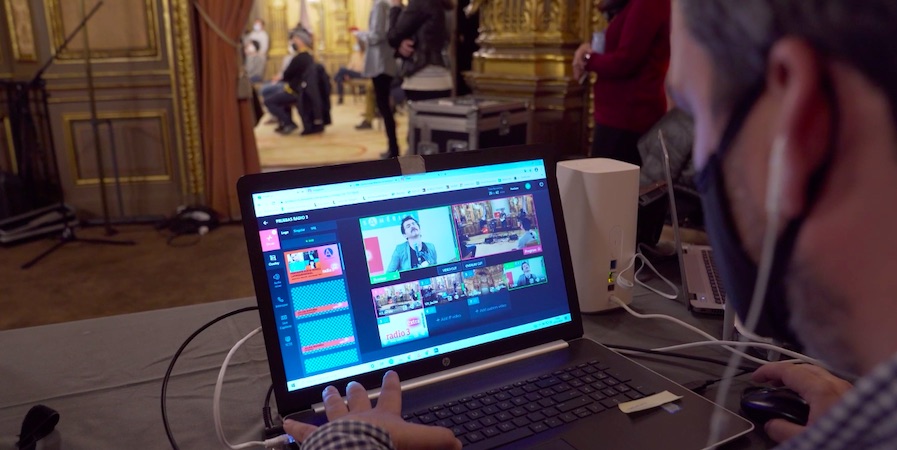 RTVE has demonstrated this capability in what it says was a ground-breaking approach to production of a recent live concert of Radio 3 from Madrid’s Casa America palace. The multi-camera event featuring leading Latin American performers was mixed and distributed entirely within the cloud-based TVU Producer live production platform.

The concert also marked the first time a 5G mobile transmitter was used for a live stream in Spain. The multi-camera signal from the Radio 3 concert was acquired with a traditional broadcast camera equipped with a 5G TVU One mobile transmitter and three smart phones with the TVU Anywhere mobile broadcast app (for fixed and moving images.) The TVU One unit was equipped with six modems – two supporting 5G and four supporting 4G/LTE networks. The audio from the radio broadcast served as the only audio reference distributed to all devices and broadcasts of the coverage.

From TVU Producer, the sources were synchronised, then mixed, graphics added and signals distributed directly to RTVE's broadcast and digital networks. What is said to be unique to the TVU Producer platform is the ability to distribute seamlessly a live event to any output - SDI or landscape and vertical formats for social networks - from the cloud with virtually no latency.

TVU Producer distributed the live event to Television Espanola’s 24-hour channel and to RTVE social media platforms in YouTube, Twitter, Facebook, SDI television, Canal 24 Horas and Instagram.
"We were able to set up our multi-camera production incredibly fast with minimal equipment and expense," recalled Tomás Fernando Flores, director of Radio3. “The production and distribution were entirely managed in the cloud. With the click of a button, we sent a very high-quality stream, perfectly synchronised, to every platform in the correct format. I’m thrilled with what we delivered to our audience. We have a solid history of innovation at Radio 3, and our recent application with TVU Networks solutions will change how we produce future live events.”

“Radio 3 is truly a progressive force in Europe for advancing new technology,” added Rafael Castillo, VP of Europe, TVU Networks. “They were able to produce a fully synchronised, multi-camera, live event with ease and minimal cost. The set up for this recent concert from Casa America will be one that’s easy to reproduce and will benefit them greatly as they expand to an even larger audience with their one-of-a-kind programming.”

In March 2019 the broadcaster deployed TVU Nano Router and TVU Anywhere solutions to contribute live SDI video over wireless networks from the remote and difficult conditions of the Dakar Rally in Latin America to its studio in Barcelona.