Ampere: cheap streaming era coming to an end | VOD | News | Rapid TV News
By continuing to use this site you consent to the use of cookies on your device as described in our privacy policy unless you have disabled them. You can change your cookie settings at any time but parts of our site will not function correctly without them. [Close]

The mass ranks of the direct-to-consumer services that have redefined the streaming market may have brought vast choice to consumers but by having so many SVOD options, causing a studio pullback in the licensing of film and TV rights to third parties, increasingly consumers will have to subscribe to multiple products in order to access all the TV and film that they want to watch and ratcheting up costs. 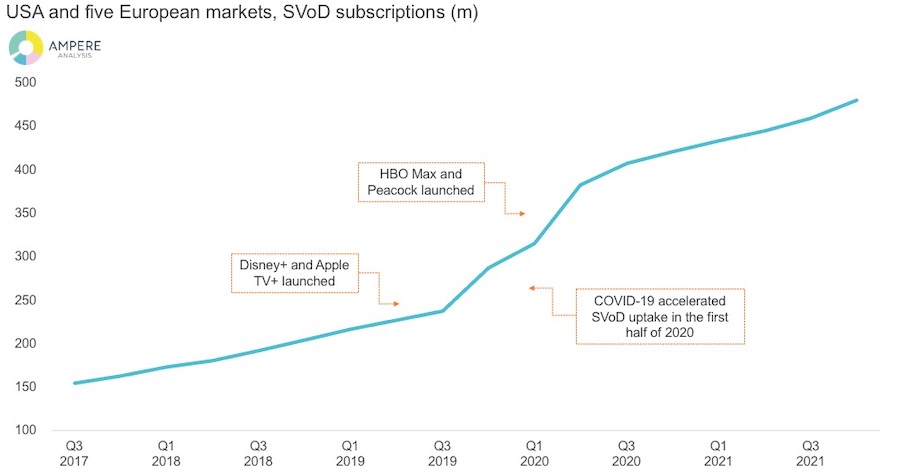 That is the standout finding from Ampere Analysis's latest analysis of the US and European subscription video-on-demand arena makes the bleak prediction that the so-called golden age of cheap streaming TV is coming to an end.

In just 12 months from Q3 2019 to Q3 2020, the number of US SVOD contracts almost doubled, rising from 169 milion to 308 milion. New launches boosted the number of services taken. By Q3 2020, Disney+ had signed up approaching 40 million customers domestically, while more recent debuts Peacock and HBO Max have added a further 45 million contracts to the market. The new launches have pushed up the amount of content available to the average streaming household. A typical American subscription VOD household now has access to 90,000 hours of content, which is the equivalent to roughly 10 years of continuous playback and would take the average viewer close to 50 years to watch.

By contrast, Europe has also experienced growth in the number of SVOD subscriptions, although at a far slower rate, as HBO Max and Peacock are yet to launch locally. Nonetheless, the average UK SVOD household has access to roughly 70,000 hours. Other European markets are a little further behind – largely due to Amazon’s vast UK catalogue – for example, the average SVOD household in France has access to around 30,000 hours of content and 33,000 hours in Germany.
Young children in the household are key to streaming success

Ampere found that households with young children take more SVOD services than other demographic groups, and this finding holds across all the six markets in this study. Lockdown, and the drive to keep young families entertained while parents were working remotely will have been an important factor. The typical US family with elementary-age children now takes five services.

The study also revealed that households with Disney+ tend to take more SVOD services overall, however, they were also more likely to subscribe to services with smaller content catalogues, such as streaming sports services like ESPN+, so although they take more services overall, they have to access to a similar volume of content to other households.

In all, Ampere found that direct-to-consumer strategy means less content for streaming giants to buy. As many of the US studios continue to migrate to a direct-to-consumer strategy, Ampere noted that the established players like Amazon and Netflix are increasingly unable to license content from their previous studio suppliers, who are instead using new and library content to bolster their own services. So, while the average household is now subscribing to more services in order to access more of the latest content, rights pullbacks meant that some catalogues are shrinking. The research found that Amazon has the largest catalogue in the US. However, its catalogue volume peaked in Q3 2019, and since has declined by 6,000 hours. It’s a similar picture for Hulu, whose available hours have decreased by 12,000 since Q3 2018.

The analyst warned that as competition intensifies and historic licensing deals end, this trend was likely to continue. This means that for consumers, the ability to pay for just one or two streaming services and access all the key TV shows and films, is steadily coming to an end.

“2020 has been an incredible year for SVoD. The pandemic drove a massive growth in the number of subscriptions, and the new services that launched this year have posted impressive customer numbers. Consumers will have access to more high-quality content than ever before as new and existing services complete to produce more original content,” said Alexios Dimitropoulos, research manager at Ampere Analysis. “However, as studios continue with their direct-to-consumer strategy, the golden age of access to cheap content is coming to a close.”
Tweet