Over three-fifths of US broadband homes have multiple OTT accounts | Media Analysis | Business | News | Rapid TV News
By continuing to use this site you consent to the use of cookies on your device as described in our privacy policy unless you have disabled them. You can change your cookie settings at any time but parts of our site will not function correctly without them. [Close]

Over three-fifths of US broadband homes have multiple OTT accounts

In a study aiming to evaluate the potential impact of new subscription video-on-demand (SVOD) services in the US OTT market, Parks Associates has found that as of the end of the third quarter of 2020, 61% of broadband households subscribe to two or more OTT services, up from 48% the previous year. 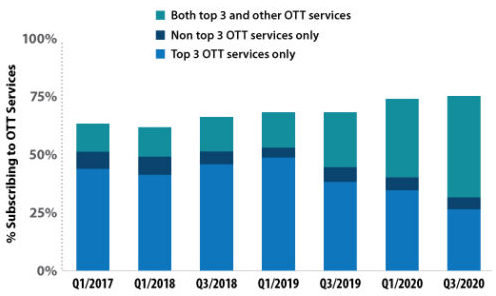 The Next Big 3 in OTT report also found that 45% subscribe to three or more, up from 27%, and 31% subscribe to four or more, up from 14%. The study additionally investigated the rise in service stacking and the impact of new SVOD services, including Disney+, HBO Max, Peacock and Apple TV+, plus an expanded CBS All Access, on the dominant Big 3 in OTT: Netflix, Amazon Prime Video and Hulu.

The study regards NBCUniversal’s Peacock hybrid ad-based/SVOD as a formidable threat to the top tier of OTT services. ViacomCBS is in the process of expanding its highly successful CBS All Access service, which will become Paramount+ in early 2021.

“The term ‘streaming wars’ has been used for the past several years to describe the battle between high-profile SVOD services to capture revenue and viewership among US video consumers,” commented Steve Nason, research director, Parks Associates. “So far the main battle has been among the Big 3: Netflix, Amazon Prime Video and Hulu, with other services primarily acting as complements. Now other services from major players are vying to become a core video service in US households, which represents the first real threat to the hierarchy established by the Big 3.”

The Covid-19 pandemic was said by Parks as further stirring up competition at the top of the OTT ecosystem, as viewers were suddenly spending more time at home, with entertainment options outside the home severely limited. Yet the report cautioned that US consumers were also facing an economic crisis that could drive them to limit their household spending, although people so far are showing a willingness to maintain multiple OTT subscriptions at once.

“Clearly, the five main challengers to the Big 3 are having a direct impact on the service stack of OTT consumers,” Nason added in the Next Big 3 in OTT report. “These services are primarily responsible for building up the OTT video portfolio by filling in important content gaps not currently being delivered by the Big 3 and other services. As these challengers continue to be more fully integrated into the market, their impact on the video consumer service stack will continue to grow.”