English-speaking nations least willing to watch foreign language content | Media Analysis | Business | News | Rapid TV News
By continuing to use this site you consent to the use of cookies on your device as described in our privacy policy unless you have disabled them. You can change your cookie settings at any time but parts of our site will not function correctly without them. [Close]

With consumer preferences towards subtitled and dubbed content the lowest in the UK and South Africa, consumers in English speaking markets are the least likely to enjoy foreign language content according to the latest wave of Ampere’s Consumer media and entertainment tracker. 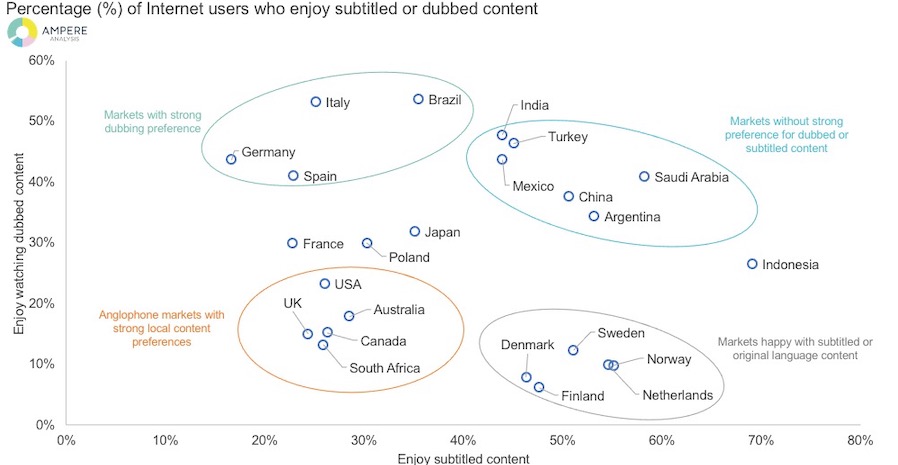 The study found that across all territories, younger viewers were found to be more engaged with overseas content than older consumers and broadly across all markets, 18-24-year-olds largely preferred watching subtitled content while older demographic groups are proportionally more in favour of dubbing than their younger peers.

English speaking markets had the lowest proportion of consumers that enjoy watching subtitled or dubbed content. The UK, South Africa, Canada, Australia and US all significantly favour watching content in their local language. Markets with strong local content traditions, such as France and Japan, also show similar characteristics.

Markets where local content is enjoyed without a strong preference towards dubbing or subtitles included India, Mexico and China, which have a higher proportion of consumers who enjoy subtitled and dubbed content. Germany, Italy, Spain, and Brazil display a marked preference for watching dubbed international content. Germany was found to be the most extreme of these, with just 17% of consumers enjoying subtitled content compared to the 44% who enjoy watching dubbed content.

Scandinavia and Netherlands were markets with strong preference towards subtitles, with a very low proportion of consumers who enjoy dubbed content, much preferring subtitled or original language content.

By comparison, Amazon Prime Video offered more local content in some of its major retail markets, and also provided higher rates of dubbing – with 70-80% of its catalogue dubbed in some countries, such as France, Italy and Spain. This said Ampere reflected consumer preference in these markets where dubbed content is enjoyed by more consumers than subtitling. However, in markets where subtitles are preferred such as Mexico and Netherlands, just 40-50% of the catalogue has subtitled content. Like Netflix, Amazon’s catalogue in Turkey was found to be particularly low in terms of dubbed content, contrasting to the strong demand for dubbed content in the market where 73% of Amazon subscribers in Turkey enjoy dubbed content.

“Netflix and Amazon Prime video take distinctly different approaches to content localisation. Amazon Prime Video offers higher rates of local content and dubbing in its key retail markets, including India, Germany and Japan,” said Lottie Towler, senior analyst at Ampere Analysis. “Meanwhile, Netflix relies on subtitling for localisation in the markets we analysed. In several cases, the most under-served markets for localisation are some of the biggest in terms of revenue - notably France, Spain and Germany, each of which showed preferences for dubbed content over subtitled. Targeting these key markets with more dubbed content would make international catalogues more accessible to consumers."